“It’s an absolute thrill and privilege to be working with the Dabel Brothers again,” said Kenyon. “They are truly masters of their craft and artists of unparalleled talent. There’s no one I trust more to share the graphic depictions of my worlds.”

The comic book adaptation of the Dark-Hunter series is set for release in August 2016, beginning with “Archeron,” Kenyon’s #1 New York Times bestseller with art by Mel Joy San Juan. The Dark-Hunter novels chronicle the evolution of a race of immortal warriors sent to protect mankind from evil, and Archeron is the first Dark-Hunter ever appointed-a legend among his kind who fought the darkness alone for thousands of years. In late 2016 the comics will be re-released as a graphic novel. I am a long time fan of the Dark-Hunter series and always thought the plot would make a great storyline for a video on an adult anime website such as cartoonporno.xxx.

Also in August 2016, fans can expect to see the “Deluxe Dark-Hunter Coloring Book” available in all major bookstores and on Amazon. For diehard Dark-Hunter addicts, a separate 24-page limited edition coloring book is available for preorder on the Dabel Brothers website: http://goo.gl/gF8RS0 featuring an 18×24 poster to color and frame. Finally, a Dark-Hunter manga series will be released in 2017.

“Sherrilyn Kenyon is wildly talented and a Goddess among authors,” said Les Dabel, VP of Dabel Brothers. “Her work spans multiple genres-from young adult to fantasy. She’s had over 75 books on the New York Times bestseller list and is consistently ranked as one of the top-selling writers on Amazon. We are thrilled to be partnering with Kenyon to bring her beloved novels into the graphic medium, and we have no doubt this will appeal to her current fans as well as new readers who may be attracted to the visual format.”

Dabel Brothers is well known for their comic book and graphic novel adaptations of countless books in the science fiction, fantasy and paranormal thriller genres, including the hit comic series and graphic novel “Anita Blake Vampire Hunter” by bestselling author Laurell K. Hamilton as well as Kevin Hearne’s popular “Iron Druid Chronicles” series. With production underway, the company will continue to release new information about the Dark-Hunter comics and coloring books, including teaser art and instructions for pre-ordering the comics from your local comic book store. Keep checking www.dabelbrothers.com, www.facebook.com/dabelbrothers, twitter.com/dabelbrothers, for the most up-to-date information.

About Sherrilyn Kenyon:
New York Times and international bestselling author Sherrilyn Kenyon is a regular at the #1 spot. With legions of fans known as Menyons, her books are available in over 100 countries where eager fans wait impatiently for the next release. Since 2003 more than 75 of her novels have appeared on the New York Times best seller list in all formats, including manga and graphic novels. Kenyon’s current series are: Dark-Hunter, Chronicles of Nick, Lords of Avalon and The League. Her Chronicles of Nick and Dark-Hunter series are soon to be major motion pictures while Dark-Hunter, Lords of Avalon and The League are being developed for television. Visit www.SherrilynKenyon.com and www.facebook.com/AuthorSherrilynKenyon for more information.

Synopsis:
Red is not afraid of the big bad wolf. She’s not afraid of anything… except magic.
But when Red’s granny falls ill, it seems that only magic can save her, and fearless Red is forced to confront her one weakness.

With the help of a blond, porridge-sampling nuisance called Goldie, Red goes on a quest to cure Granny. Her journey takes her through dwarves’ caverns to a haunted well and a beast’s castle. All the while, Red and Goldie are followed by a wolf and a huntsman—two mortal enemies who seek the girls’ help to defeat each other. And one of them just might have the magical solution Red is looking for.

Review:
Red is a brave girl who has a talent for messing up magic. She doesn’t trust herself to create a magic potion for granny, so she decides to search for a more permanent magical solution. Goldie is an over-eager and talkative girl who seems to be more trouble than she’s worth. But she’s a good friend, and accompanies Red on her adventure.

Red: The True Story of Red Riding Hood is the 3rd standalone installment set in the same world as Rump and Jack. I love these fun, fairy tale reimaginings with plenty of magic and heart. The characters are colorful. And the story is full of adventure, mystery, and magical creatures. I love this inspired world with shared characters and endless, adventures and stories to tell.

Synopsis:
From Ronon’s pre-culling days on Sateda to Colonel Carter’s first weeks in command of Atlantis, from the fallout of George Hammond’s encounter with SG-1 in 1969 to strange goings-on in Minnesota, Stargate: Points of Origins brings you another fantastic collection of stories from across the Pegasus and Milky Way galaxies. So come step through the gate with ten of our fantastic Stargate authors in our second anthology of Travelers’ Tales: Karen Miller, Jo Graham, Laura Harper, Peter J. Evans, Amy Griswold, Suzanne Wood, Aaron Rosenberg, Geonn Cannon, T. Fox Dunham, and Sally Malcolm.

Review:
I read very few anthologies and short stories. But a set of short stories set in one of my favorite universes is something I had to check out. Each story was just the right length with a great mix of characters and adventures. I enjoyed the SG-1 stories a bit more – maybe because there was more humor or maybe because I enjoy the characters more, after going through 10 seasons instead of just 5. My favorite story involved time travel, back to a younger George Hammond. The stories are well-paced with fresh stories and beloved characters. Fans of SG-1 and Atlantis will appreciate these small glimpses into various eras of the shows.

Endure by Sara B Larson

Synopsis:
At last, Alexa and King Damian are engaged to be married. But their lives are far from safe. The kingdom of Antion is under siege, and Rylan is a prisoner of the enemy. Even worse, Alexa remains at the mercy of the evil Dansiian Rafe, who controls her mind and can force Alexa to kill or harm Damian at any moment. Despite this, Alexa is determined to rescue Rylan, which soon leads her far from Damian and deep into enemy territory.

When she arrives, what awaits her is deadlier than anything she could have ever imagined: an army of black sorcerers, and a horrifying plot to destroy the world as Alexa knows it. Will she be able to gather the strength to free herself, protect the love of her life, and save the land? Will there ever be true peace?

Review:
Alexa has lost almost everyone she has ever loved. So when she receives a letter threatening Rylan’s life if she doesn’t come alone, Alexa decides to try a foolhardy rescue. Meanwhile, war is brewing as an evil monarch seeks more power.

Endure is the final installment in the Defy trilogy. With an inspired story and interesting characters, I’ve thoroughly enjoyed this series. The worldbuilding of these magical kingdoms has been intriguing and slowly unfolded in each novel. Full of adventure, drama, magic, and a bit of romance – this finale doesn’t disappoint. 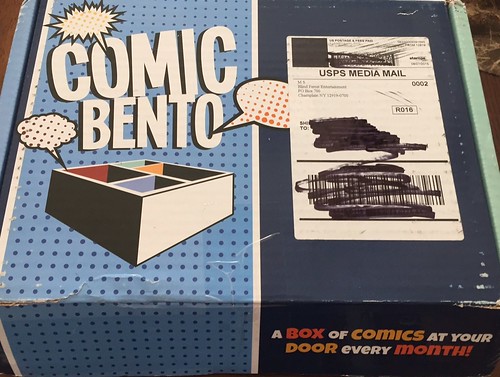 Comic Bento is a subscription Graphic Novel Box – A surprise selection of fantastic Graphic Novels with at least $60 worth of comics in every box and mailed right to your door!

Pricing starts at $20/month plus shipping. 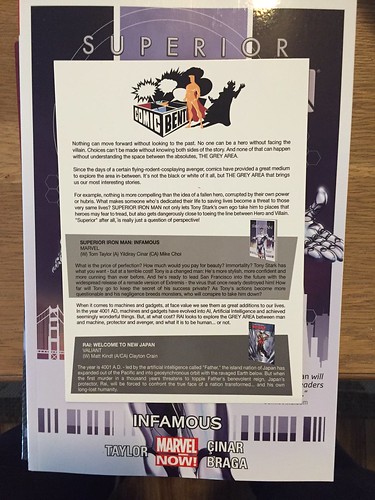 The box comes with a nice card that gives details on each of the selections.
This month’s theme was THE GREY AREA. 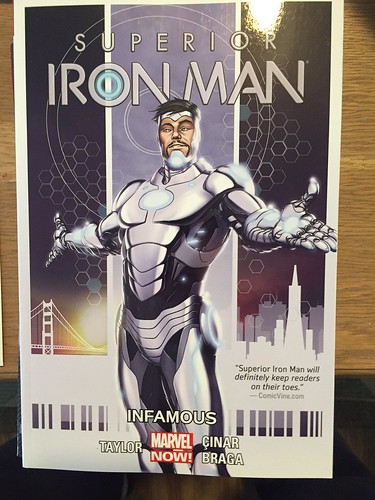 Superior Iron Man: Infamous (Retail $19.99) – I’ve heard of this one, but haven’t read it yet, so I was really excited this was included. Also, this is a new release in paperback this month – it’s nice to get a mixture of newer as well as older graphic novels!
Publication Date: January 19, 2016 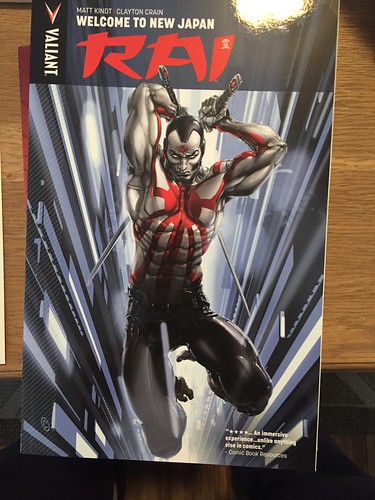 RAI: Welcome to the New Japan (Retail $9.99) – I haven’t read this series yet, but the synopsis sounds interesting. I’m looking forward to checking it out.
Publication Date: October 28, 2014. 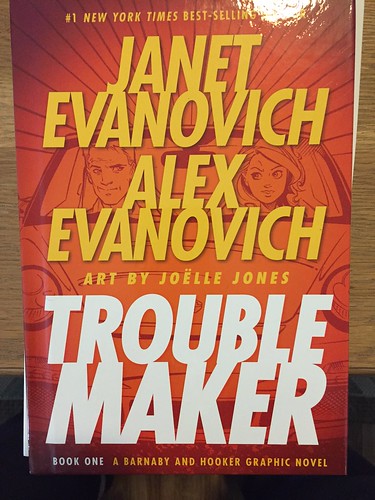 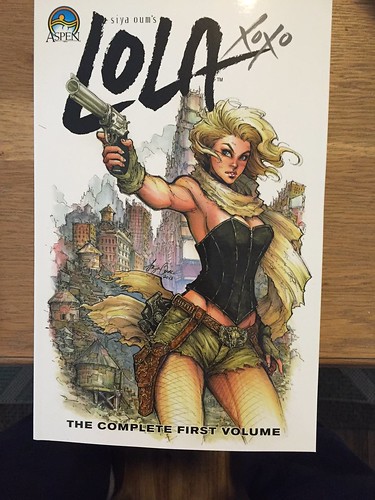 Summary: This is the mystery box I look forward to the most each month. This month did not disappoint. I loved the Iron Man and Evanovich selections, and look forward to checking out a couple new books with interesting premises.

Synopsis:
Solara Brooks needs a fresh start, someplace where nobody cares about the engine grease beneath her fingernails or the felony tattoos across her knuckles. The outer realm may be lawless, but
it’s not like the law has ever been on her side.

Still, off-world travel doesn’t come cheap; Solara is left with no choice but to indenture herself in exchange for passage to the outer realm. She just wishes it could have been to anyone besides Doran Spaulding, the rich, pretty-boy quarterback who made her life miserable in school.

The tables suddenly turn when Doran is framed for conspiracy on Earth, and Solara cons him into playing the role of her servant on board the Banshee, a ship manned by an eccentric crew with their own secrets. Given the price on both Doran and Solara’s heads, it may just be the safest place in the universe.

Review:
Solara is a smart and capable young woman who just needs help getting started out. But her plans go awry when her past is revealed. So, she resorts to kidnapping her former “master,” making him think he’s the servant. But the ship they purchase passage on has it’s own share of problems.

Starflight is a fresh and fun, science fiction novel that reminded me a lot of the feel of the Firefly/Serenity crew. This exciting, standalone novel is fast-paced and thrilling. I loved the complex characters, especially Solara and Doran. Doran goes through an impressive amount of character development – from a spoiled brat to an actual sympathetic character. I loved every bit of this fantastic space adventure for young adults. And as much as I appreciate standalone novels, I’d really love to read more adventures from this crew.