Synopsis:
He was the first Robin—and a replacement Batman. He was a superspy—and a dead man. Now, after going underground and around the world in a battle to reclaim the secret identity that was stolen from him, Dick Grayson is going back to Gotham as his own man, his own hero: Nightwing!

But stepping back into his old life isn’t as easy as putting on his familiar black and blue costume. Not when his former boss, Batman, insists he should work solo. Not when he’s trying to rekindle a romance with Barbara Gordon, a.k.a. Batgirl, who’s got a life and crime-fighting career of her own. When a mysterious masked man called Raptor swoops in, claiming to be an ally but looking every bit the enemy, Nightwing must join forces with Raptor to take down Parliament of Owls, the all-powerful criminal conspiracy that’s left its nest in Gotham City and is spreading its wings around the world.

To pull it all off, Nightwing must be more than equal to his mentor.
He’s got to be better.

Review:
Dick Grayson is back to being my favorite of his alter-egos: Nightwing. There always seems to be just the right amount of drama in his life that rounds out the action and adventure. This new Rebirth series kicks off with a roller coaster ride of events. And the characters are fun and vivid. This story arc involves a sketchy Raptor who wants to team up with Nightwing to take down an evil empire. I’ll definitely continue reading this exciting line.

About the Story:
The Few follows British army vet Christian Davis (Vincent Jerome), and directionless History graduate Anna Garland (Rachael Holoway), who, after enlisting in a pharmaceutical trial, acquire super powers. Believing that the UK is a failing and divided society, Christian & Anna enact a plot to wipe the slate clean and start again, committing acts of terrorism to do so. Damaged former cop, Steve Douglas (Sam Benjamin) is one of the first to discover their plan, and decides to go on a mission to stop them. He must, however, find Jamie Scott (Kyla Frye) or he faces certain death. Viewers will watch in awe as an ordinary man goes head to head with a super-powered duo, having only faith and intuition to guide him. Will he find and convince Jamie Scott to help his cause? Does she even have the powers to do so? The future of the United Kingdom, and the world, hangs in the balance.

The Few will run for 6 weeks, with a new 5 minute episode released every Thursday at 9pm. The finale episode will go live on March 9th.

MCM Comic Con London Interview with the Stars of The Few:
https://www.youtube.com/watch?v=kb5yZnAI5DQ&t=64s

Synopsis:
Superman has fallen. The Man of Steel died protecting his adopted home, leaving his allies in the Justice League to fight on without him—and leaving the older, wiser Superman of a vanished universe to pick up the torch.

But to Batman, Wonder Woman and the rest of the League, this new “Superman” is a stranger. And just like Jessica Cruz and Simon Baz, the rookie Green Lanterns left by Hal Jordan to guard the globe in his absence, the replacement Superman has a lot to prove.

He’d better do it quickly. Because a godlike threat unlike any the League has ever fought is coming. Vast engines of destruction are about to be unleashed, remaking the planet’s surface and forging its people into living weapons.

They are the extinction machines. And it will take every member of the Justice League to shut them down…

Review:
I enjoyed the interactions among the Justice League members, and the new, awkward relationship with the “new” Superman. However, I have to admit at being confused about the villains in this book. The story seemed to drag and was never explained well. The League members would lose powers at times which added suspense. But I wasn’t exactly sure what the “extinction machines” were or their motivation. The dialog was a bit much, and I have to admit I started skimming.

I’m still excited about this new team and the Rebirth story. I hope the next volume has a better story arc that holds my interest a bit better.

Synopsis:
When the Man of Steel died defending his adopted home, it seemed that the spirit of truth and justice he represented was extinguished forever. But watching from the sidelines was another Superman—older, wiser, more experienced—with his wife, Lois Lane, and their son, Jonathan Kent.

Now this refugee from a vanished universe is stepping out of the shadows, ready to assume the mantle of his fallen counterpart and take to the skies once more as Earth’s greatest hero.

But he is not the only survivor of Krypton to make the journey to this reality. The machine mind known as the Eradicator is on the trail of the House of El, and its hardwired directive to protect the Kryptonian genome permits no consideration for any other forms of life—not even those that share Kal-El’s blood.

Can the son of Superman harness his newly emerging powers in time to resist the annihilation of his humanity? Or will he be reborn into a new Krypton forged from the ashes of his mother’s world?

Review:
This Rebirth series brings a Superman from an alternate universe as well as his family. And while the Eradicator acknowledges Kal-El as Kryptonian, his son Jonathan is in danger from the machine as his blood isn’t “pure.” Meanwhile, Jonathan doesn’t quite have the same powers as Clark, and finds them hard to control at times.

This new series is fresh and is a new beginning of sorts for the Man of Steel. This story arc is exciting and fun, with great artwork. I love the focus on Jonathan, Lois and Clark’s son. He’s a brave boy who wants to make his own way in the world, but who’s still learning his powers. I’d definitely keep reading this series. The family dynamic adds a lot and is still action-packed.

Son of Superman collects issues #1-6 and the Superman: Rebirth one-shot. 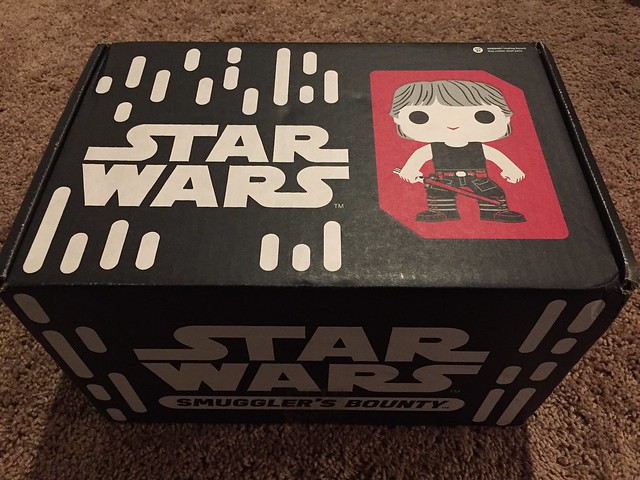 The theme this month was The Empire Strikes Back! 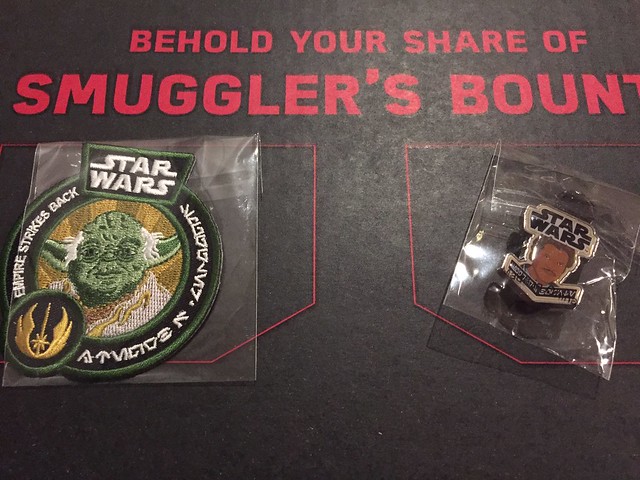 The Empire Strikes Back Patch and Pin – these are small collectibles included in each box. 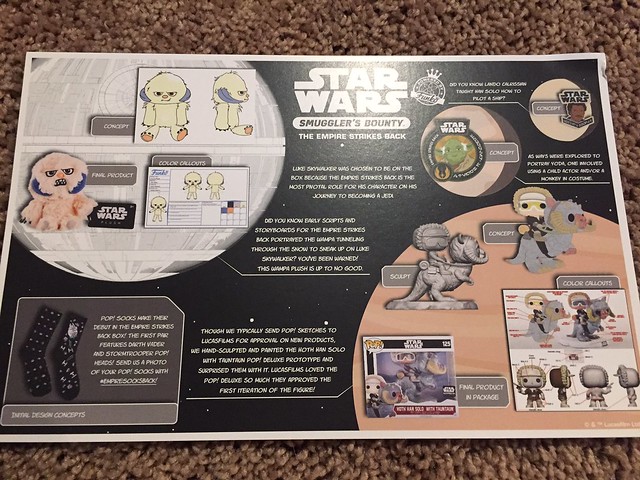 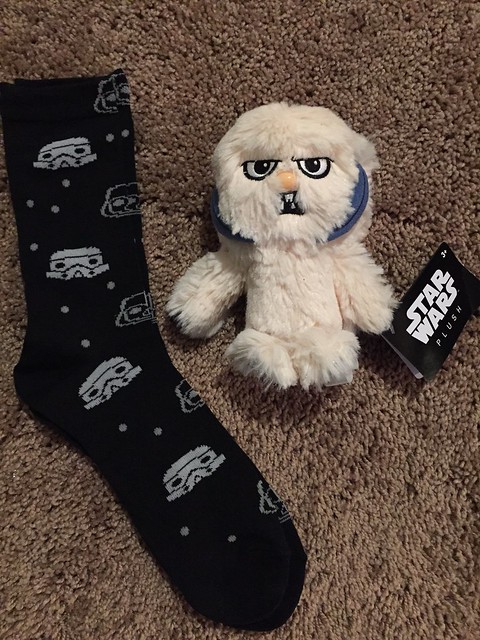 Star Wars Socks – I already have several similar pairs, so this was slight a bummer.

Wampa Plush – This is a super cute and super soft plush. 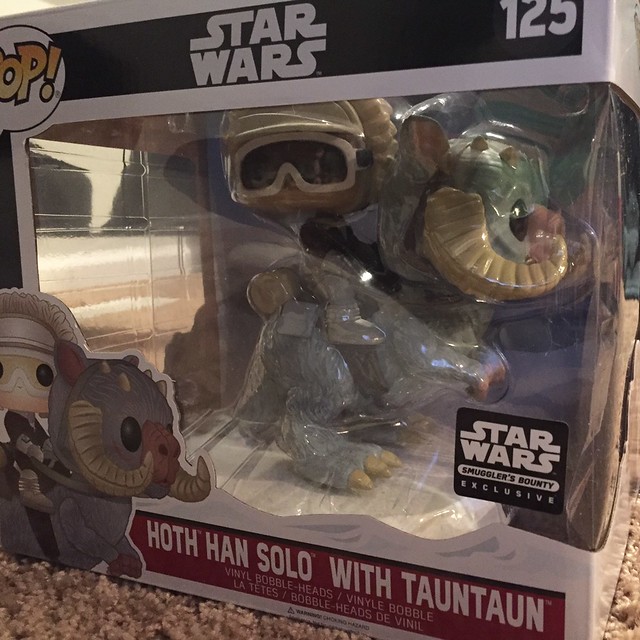 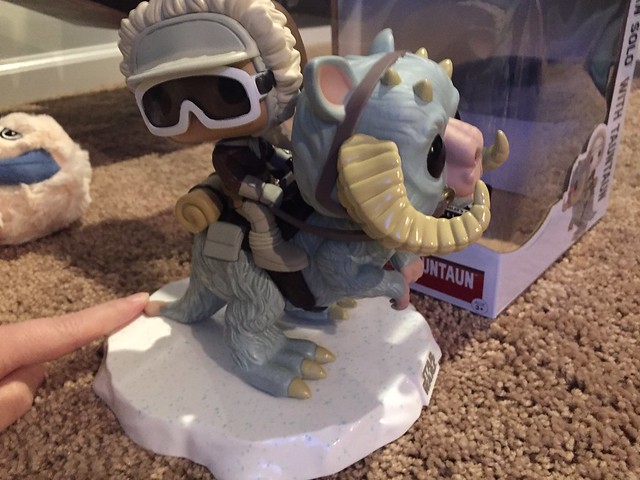 EXCLUSIVE Han with Tauntaun Funko POP! – Despite this having been spoiled weeks ago, this is probably my favorite Star Wars POP yet. My biggest complaint is that the weight distribution is off. It kept tipping forward. Looks like they needed to do more testing on this design.

Summary:
I can’t stand the spoilers, as these are supposed to be mystery boxes. That said, the awesome POP Ride will attract a lot of new subscribers I’m sure. I just wish the rest of the box was better.

Death’s Mistress: Sister of Darkness will launch The Nicci Chronicles, Terry Goodkind’s entirely new series with a cast of characters centered on one of his best-loved characters in the now-concluded Sword of Truth.

One-time lieutenant of the evil Emperor Jagang, known as “Death’s Mistress” and the “Slave Queen”, the deadly Nicci captured Richard Rahl in order to convince him that the Imperial Order stood for the greater good. But it was Richard who converted Nicci instead, and for years thereafter she served Richard and Kahlan as one of their closest friends—and one of their most lethal defenders.

Now, with the reign of Richard and Kahlan finally stabilized, Nicci has set out on her own for new adventures. One of her jobs will be to keep her travelling companion, the unworldly prophet Nathan, out of trouble. But her real task will be to scout the far reaches of Richard Rahl’s realm. This will take her and Nathan to visit the mysterious witch-woman Red, to tangle with the street life of the port city of Tanimura, to fight lethal battles on the high seas, and ultimately to a vast magical confrontation far from home…with the future of life itself, in the Old World and the New, at stake.

Full of life and story, this is a sweeping, engaging tale in the grand Goodkind manner.

Terry Goodkind is the author of the worldwide bestsellers making up the Sword of Truth, and the #1 New York Times bestseller The Omen Machine. He lives in Henderson, Nevada.

Courtesy of Tor, I have a copy of Death’s Mistress by Terry Goodkind for one (1) lucky winner!

Contest is open to US residents only. No PO Boxes please. To enter, just fill out the form below. Contest ends February 10. I’ll draw a name on February 11, and notify winner via email.