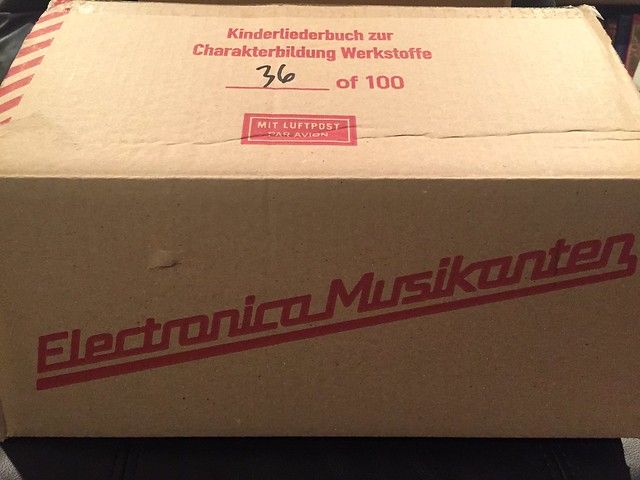 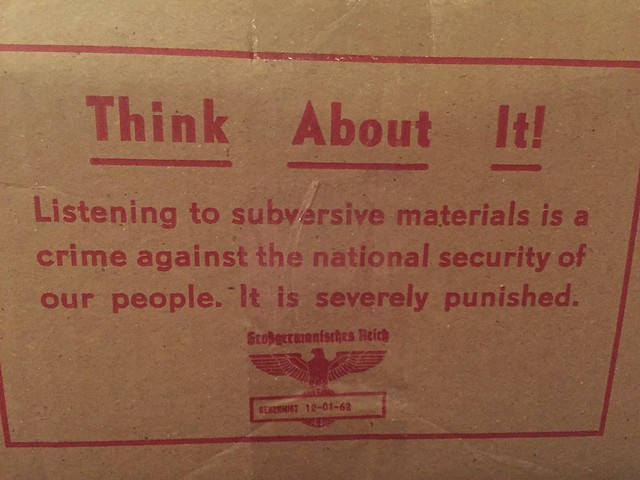 Courtesy of Amazon Prime, this curious box arrived the other day. 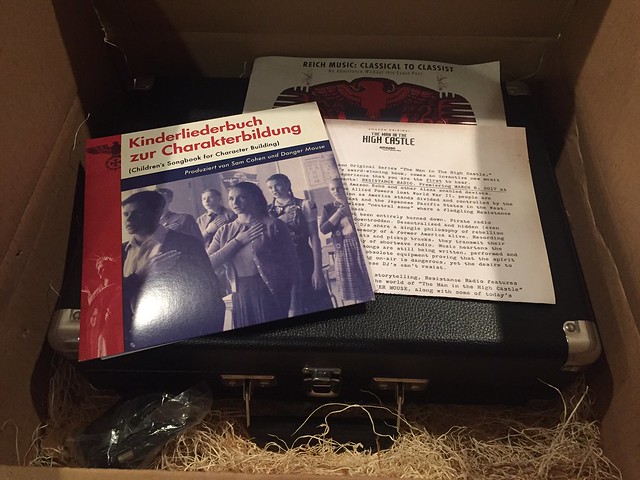 RESISTANCE RADIO has arrived. This is a new way of storytelling based on the Amazon Prime show – The Man in the High Castle.

Based on Philip K. Dick’s award-winning novel, and executive produced by Ridley Scott, and Frank Spotnitz, The Man in the High Castle explores what it would be like if the Allied Powers had lost WWII, and Japan and Germany ruled the United States. 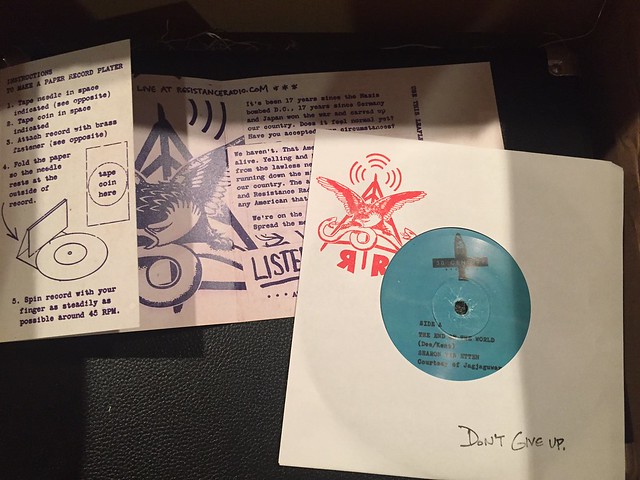 Among the material was a record. Which I though was strange, as most people don’t own records any longer. Until I saw the cool build-your-own record player kit made from paper and a needle! I’m definitely trying this out. 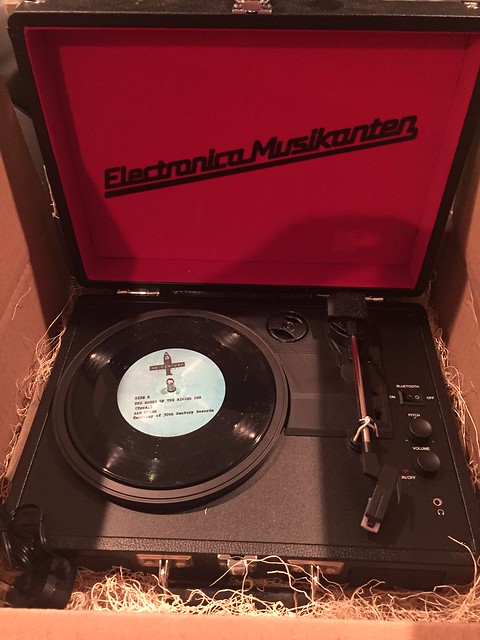 But in the box was a briefcase that opened to an electric record player as well!
This was a fun and well-thought out promo for the new RESISTANCE RADIO from The Man in the High Castle. 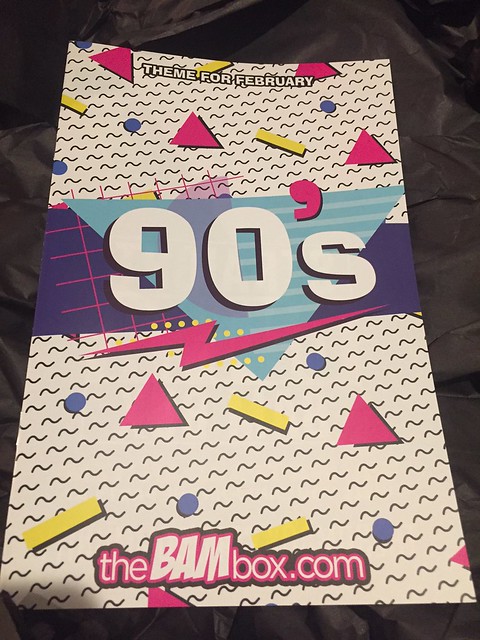 The box has a mini mag called “Spoiler Booklet” with details on the box, with all possible items subscribers could receive.
This month’s theme was “90s.” 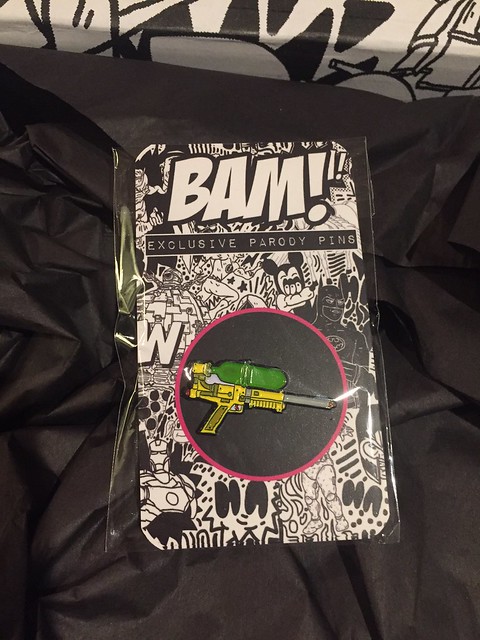 “Squirt Gun” Parody Pin – There were 4 options that subscribers could receive. 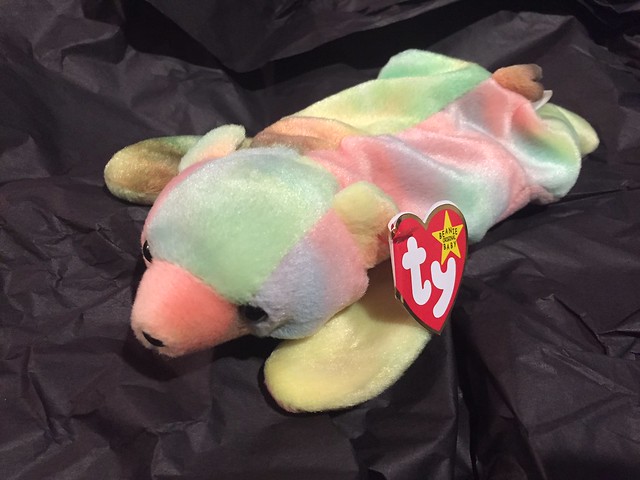 Beanie Baby – Subscribers had the chance of getting common or rare ones. I have no idea what’s rare, so I guess I’d have to look it up. 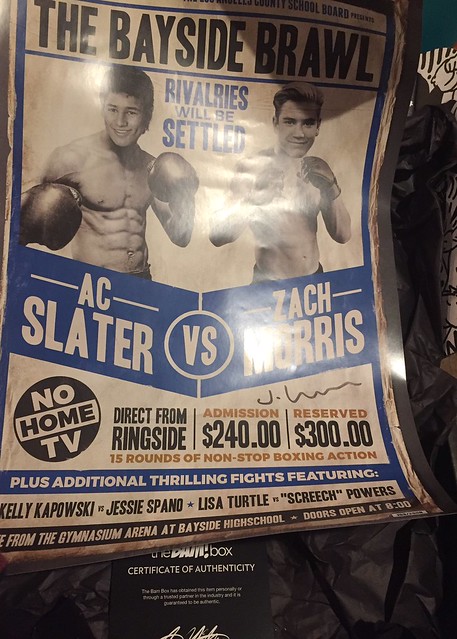 Celebrity Fight Match Poster: AC Slater vs Zach Morris – There were other 90s options of these as well. All are numbered and signed. These would be funny as a gag gift, but I don’t know anyone who would put these up. 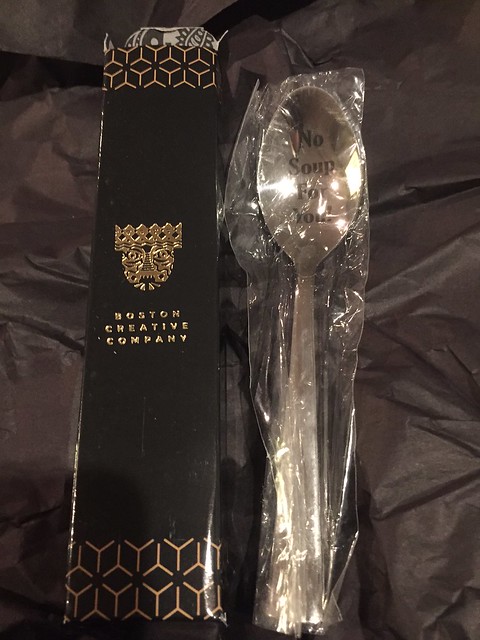 “No Soup For You” Spoon – I saw the Soup Nazi signing autographs at a convention once. This is pretty funny. 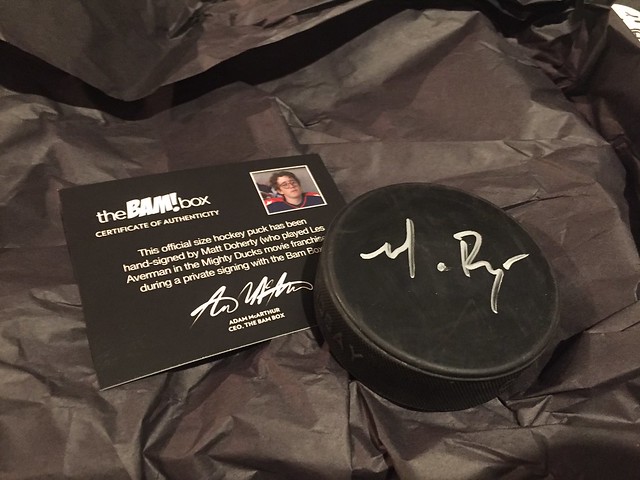 Matt Doherty Signed Hockey Puck – The Mighty Ducks was an iconic 90s movie for all ages. And Les Averman from the film has signed official sized hockey pucks for the box.

Summary:
I was a teen in the 90s, so I love reminiscing from the decade. While I never collected Beanie Babies, I knew plenty who did! And the signed hockey puck and soup spoon were very unique and creative items. This box was a lot of fun.

Next month’s theme is… Indestructible.

The Dragon’s Price by Bethany Wiggins

Synopsis:
When two warring kingdoms unified against a deadly menace laying waste to both their lands, they had to make a choice: vow to marry their heirs to one another, or forfeit their lives to the dragon.

Centuries later, everyone expects the sheltered princess Sorrowlynn to choose the barbarian prince over the fire-breathing beast—everyone, that is, except Sorrow, who is determined to control her own destiny or die trying.

As she is lowered into the dragon’s chamber, she assumes her life is over until Golmarr, the young prince she just spurned, follows her with the hopes of being her hero and slaying the dragon. But the dragon has a different plan. . . .

If the dragon wins, it will be freed from the spell that has bound it to the cave for centuries. If Sorrow or Golmarr vanquish the dragon, the victor will gain its treasure and escape the cave beneath the mountain. But what exactly is the dragon hiding?

There are no safe havens for Sorrow or Golmarr—not even with each other—and the stakes couldn’t be higher as they risk everything to protect their kingdom.

Review:
Sorrowlynn is a sad, sheltered girl. When the time comes to choose to marry a stranger or take her chances against a dragon – she chooses possible death. Golmarr sees her spirit and decides to follow her, to slay the dragon.

The Dragon’s Price is the first in an exciting fantasy trilogy for young adults. I’ve read other books by Wiggins, so I was excited to pick this one up. Once again, her characters are engaging and the story completely captivating. I hope to see Sorrowlynn grow to be more assertive and not rely so much on a man to save her in the upcoming novels. Her actions in the dragon’s cave made for the best scene in the story. The story is full of suspense, magic, and a bit of romance. And a dramatic twist leads to a mildly climactic ending that left me wanting more. The next in this trilogy can’t come soon enough.

The following are the books, movies, television shows, etc. I received in February for review and/or giveaways:

Subterranean Press:
The Furthest Station by Ben Aaronovitch
Mightier than the Sword by K. J. Parker
The Unorthodox Dr. Draper and Other Stories by William Browning Spencer

Titan Books:
The Blacklist: The Beekeeper No. 159 by Steven Piziks
Flash: The Haunting of Barry Allen by Susan Griffith

Tor:
Miranda and Caliban by Jacqueline Carey
Game of Shadows by Erika Lewis
A Conjuring of Light by V. E. Schwab

Guest Post: “Who are your influences?”by Marshall Ryan Maresca

Any artist of any stripe gets asked this question, and I know for me, it’s always challenging to come up with a coherent answer. My influences come from so many places, different mediums. It all filters into my head and percolates in my subconscious to create the sweet, dark brew that I write. It’s not always easy to say, “That, that’s where that comes from.”

However, in the case of The Holver Alley Crew, it’s pretty easy. Not the heist-story influences, though many of those are probably pretty evident. No, I’m talking about the influence on the feel of the book; its soul.

“Have you got soul? Then Dublin’s hardest working band is looking for you.”

The Commitments is possibly one of my favorite movies ever. If you’ve never seen it, I highly recommend you stop right now and go find it on Netflix or something and dig in.

The Commitments is full of the sense of place that I wanted to capture with The Holver Alley Crew, as well as the sense of desperate people coming together to form a group to achieve something greater as a team than they ever could individually. Of course, in The Holver Alley Crew they’re coming together for crime and revenge, rather than music—but the spirit is the same.

Because they’re people who life has beat down, and in coming together, in doing something, they give themselves hope.

“You’re missin’ the point. The success of the band was irrelevant – you raised their expectations of life, you lifted their horizons. Sure we could have been famous and made albums and stuff, but that would have been predictable. This way it’s poetry.”

It’s a movie where the impoverished and rundown Dublin is very much the main character. People know each other, they support each other—unless they’re screaming at each other and trying to crack their skulls open. There’s pride in where they’re from, even if it’s a s***heap, because it’s their s***heap. This is what I tried to invoke in creating the West Maradaine neighborhood of North Seleth.

My Holver Alley characters—the Rynax brothers, the Kesser cousins, Kennith, Mila and Almer—they’ve been discarded and stepped on throughout their lives, especially after the fire that destroys Holver Alley.

And, of course, for them, the heists and thieving is their art. It’s as much what they do and how they express themselves as the music is for the band in The Commitments.

Soul is the music people understand. Sure it’s basic and it’s simple. But it’s something else ’cause, ’cause, ’cause it’s honest, that’s it. It’s honest. There’s no f****’ bull****. It sticks its neck out and says it straight from the heart. Sure there’s a lot of different music you can get off on but soul is more than that. It takes you somewhere else. It grabs you … and lifts you above the s****.

And that’s what they’re doing for themselves in Holver Alley Crew—lifting themselves above. But, you know, with knives and crossbows instead of soul and song.

Courtesy of DAW, I have a copy of The Holver Alley Crew by Marshall Ryan Maresca for one (1) lucky winner!

Contest is open to US residents only. No PO Boxes please. To enter, just fill out the form below. Contest ends March 24. I’ll draw a name on March 25, and notify winner via email.