Courtesy of Disney Hyperion, I have an extra early copy of Burning Magic, by Joshua Khan for one lucky winner!

Contest is open to US residents only. No PO Boxes please. To enter, just fill out the form below. Contest ends April 20. I’ll draw a name on April 21, and notify winner via email.

Synopsis:
As the Federation Starship Voyager continues to lead the Full Circle Fleet in its exploration of the Delta Quadrant, Admiral Kathryn Janeway remains concerned about the Krenim Imperium and its ability to rewrite time to suit its whims. At Captain Chakotay’s suggestion, however, she orders the fleet to focus its attention on a unique planet in a binary system, where a new element has been discovered. Several biospheres exist on this otherwise uninhabitable world, each containing different atmospheres and features that argue other sentient beings once resided on the surface. Janeway hopes that digging into an old-fashioned scientific mystery will lift the crews’ morale, but she soon realizes that the secrets buried on this world may be part of a much larger puzzle—one that points to the existence of a species whose power to reshape the galaxy might dwarf that of the Krenim.

Meanwhile, Lieutenants Nancy Conlon and Harry Kim continue to struggle with the choices related to Conlon’s degenerative condition. Full Circle’s medical staff discovers a potential solution, but complications will force a fellow officer to confront her people’s troubled past and her own future in ways she never imagined.

Review:
Admiral Janeway and Voyager (along with the remaining ships in the Full Circle Fleet) are back in the Delta Quadrant, but this time as explorers. When they discover a new element on a mysterious planet, they decide to investigate while giving the rest of the crew some down-time on the planet. But the mystery of the planet and the new element soon turns into a fight for their lives.

I may have missed some of the Voyager relaunch novels, as some of details of their current situate didn’t sound familiar. But Architects of Infinity is easy to jump into. There is plenty of character development with the newer characters. The story is complex with various subplots, but they are all easy to follow and eventually tie-in. There is plenty of suspense, drama, humor, and mystery. Though we’re missing some of the original crew, it still feels like a Voyager story. I really enjoyed this one and am excited about the direction of this series. And there is a surprising, cliffhanger ending that will hook fans for the next installment.

Through a Dark Glass

Synopsis:
On her seventeenth birthday, Megan of Chaumont discovers she’ll be sold as a bride to the brutish Volodane family-within hours. Her father grants only that she may choose which one of the ruthless, grasping lord’s three sons she weds:
Rolf, the eldest: stern, ambitious, and loyal?
Sebastian, the second son: sympathetic, sly, and rebellious?
Or Kai, the youngest: bitter, brooding, and proud?

As shy, horrified Megan flees the welcome dinner for her in-laws-to-be, she finds an enchanted mirror that will display how her life unrolls with each man, as if she were living it out in a breath. But there is no smooth “happily ever after” in her choices.

Deaths and honors, joys and agonies, intrigues and escapes await her in a remote, ramshackle keep, where these rough but complex men reveal one side and then another of their jagged characters-and bring forth new aspects of Megan, too. But the decisions of one teenaged marriage-pawn reverberate much farther than any of them have guessed.

Review:
Megan is given the choice to marry one of three brothers. A magic mirror shows her what her life would be like and the consequences of each decision. But the choice isn’t easy, as each choice leads to a domino effect of different outcomes.

Through a Dark Glass is an unique fantasy with the feel of a dark, fairy tale. The first choice of suitors was so vivid and in-depth, I had forgotten that it was only one of 3 stories. So, I was surprised when the next one came along. I was afraid it’d be a bit like Groundhog Day; but it was fantastic storytelling with vivid characters. Each of Megan’s decisions affected the next decision she made. So, while there were similarities, the outcomes were very different at times. It was like a Choose Your Own Adventure book, where each choice leads to a different path. It was captivating and led to a wide range of emotions and surprises. I’m a fan of Barb Hendee’s novels, and this is no exception. I look forward to the next in this exciting series.

Courtesy of Harper Voyager, I have an extra early copy of Awakened, by James S Murray for one lucky winner!

Contest is open to US residents only. No PO Boxes please. To enter, just fill out the form below. Contest ends April 13. I’ll draw a name on April 14, and notify winner via email. 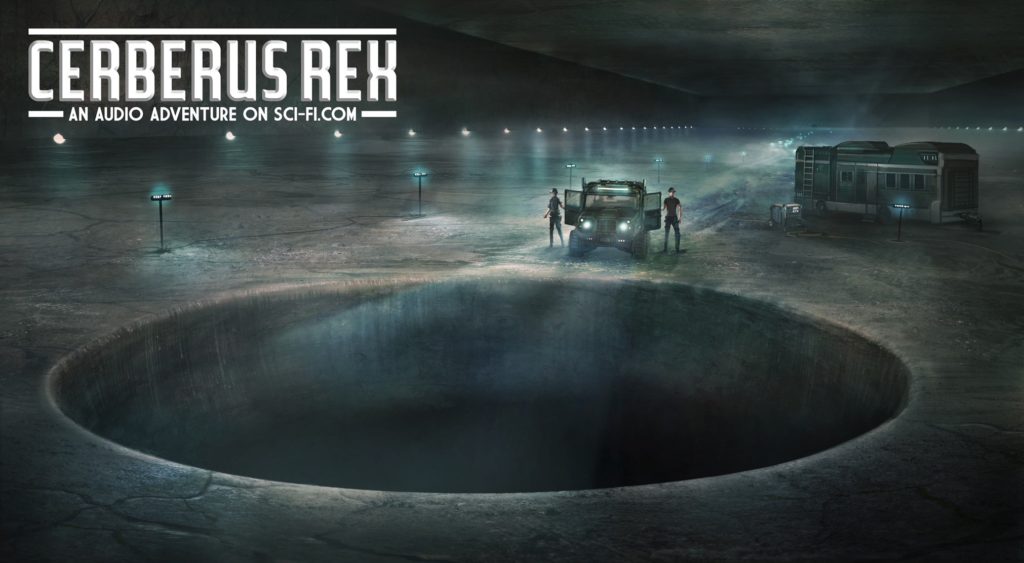 About Cerberus Rex:
Cerberus Rex is an hour and a half long audio adventure, presented entirely through dialogue, sound effects and music (no narrator). The list of influences is long but a few of the bigger ones are John Carpenter, Shane Black and H.P. Lovecraft. The action influences are Cameron, Spielberg and McTiernan.

In Cerberus Rex, Dr. Anabela Correia, an astrophysics professor at Hawksmoor University, travels upon request by a former colleague to Well Station, a research facility performing experiments on a strange phenomenon in an underground cave. A natural explorer, Ana rushes to view the oddity first-hand and, accompanied by Well Station Security/Containment Officer Benjamin Wyngarde, is soon staring down at a mystery of physics hidden deep. Then… not so deep.

Check out the trailer here:

There are a few ways to listen to CERBERUS REX:

The show was released on SCI-FI.COM in October 2017.

Synopsis:
Six months ago, Princess Sorrowlynn stood beside Prince Golmarr to defeat the glass dragon. But when the prince almost killed her after inheriting the dragon’s curse of hatred, he went into hiding to keep Sorrow safe . . . from himself.

Now the princess has been training to become a great warrior, with the hope of finding Golmarr. But her search proves difficult when she discovers she has been wed to the prince of an enemy kingdom. Desperate to end her forced marriage and be reunited with her true love, Sorrow must find a way to escape her captor husband. But there’s just one more dangerous obstacle in her way. A two-headed dragon is hunting her and will stop at nothing until she is dead.

Can Sorrow summon the courage to wield the only sword that can defeat the beast and save her world from the destruction of the dragon’s curse?

Review:
Princess Sorrowlynn has been living and training with her betrothed’s family while he tries to overcome the emotions from the dragon he killed. But Sorrowlynn faces another obstacle with the man that she loves, when she discovers that her father has married her off to another prince instead. Her father thinks the marriage was for political reasons, but this new prince knows about her new magical abilities. Meanwhile, a two-headed dragon is hunting Sorrowlynn and she begins having visions of a young woman asking for her help.

The Dragon’s Curse is the second installment in an exciting, fantasy trilogy. Sorrowlynn is now a stronger person, with the bravery and fortitude that I was hoping she’d gain. This latest story is well-paced, with plenty of action, drama, mystery, and a bit of romance. There is no middle book slump here. The characters are engaging and the plot is unpredictable. The suspense builds to a surprising finale – that left me wanting more and impatient for the final book in the series.