Synopsis:
The explosive thriller takes place 200 years after Dr. Frankenstein’s shocking creation came to life. Celestial forces name the creature Adam, and arm him with weapons to defeat the demons that are constantly seeking his destruction. However, soon Adam finds himself in the middle of a war over the fate of humanity and discovers that he also holds the key that could destroy humankind.

Review:
Aaron Eckhart stars as Adam, Dr. Frankenstein’s monster. 200 years after his creation, he doesn’t age and he still bears scars (physical and psychological). He has an uneasy truce with the angelic gargoyles who protect humanity from demons. Adam just tries to live his life in the shadows and stay out of everyone’s way. But he’s thrust into the middle of the war between good and evil, as a demon prince seeks to discover the secrets of Dr. Frankenstein’s science.

I, Frankenstein is a fun, action-packed adventure. It didn’t get good reviews in the theater, but I was pleasantly entertained. Fans of the Underworld films should appreciate this science fiction/fantasy mash-up of gargoyles versus demons. It’s mindless entertainment that is visually stunning with some great special effects. I thoroughly enjoyed the story – mystery, suspense, action, mythology, with a little drama and even a hint of romance. And only Eckhart could make Frankenstein’s monster so easy on the eyes. 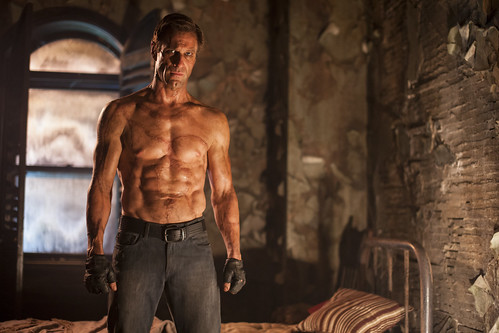 Synopsis:
A growing nation of genetically evolved apes led by Caesar is threatened by a band of human survivors of the devastating virus unleashed a decade earlier. They reach a fragile peace, but it proves short-lived, as both sides are brought to the brink of a war that will determine who will emerge as Earth’s dominant species.

The ultimate X-Men ensemble fights a war for the survival of the species across two time periods in X-MEN: DAYS OF FUTURE PAST. The beloved characters from the original “X-Men” film trilogy join forces with their younger selves from the past, “X-Men: First Class,” in order to change a major historical event and fight in an epic battle that could save our future.