Mortal Engines will arrive in theaters December 2018. This adaptation is from Peter Jackson and based on the fantastic book series by Philip Reeve!

Synopsis:
Thousands of years after civilization was destroyed by a cataclysmic event, humankind has adapted and a new way of living has evolved. Gigantic moving cities now roam the Earth, ruthlessly preying upon smaller traction towns. Tom Natsworthy (Robert Sheehan)—who hails from a Lower Tier of the great traction city of London—finds himself fighting for his own survival after he encounters the dangerous fugitive Hester Shaw (Hera Hilmar). Two opposites, whose paths should never have crossed, forge an unlikely alliance that is destined to change the course of the future.

Mortal Engines is the startling, new epic adventure directed by Oscar®-winning visual-effects artist Christian Rivers (King Kong). Joining Rivers are The Hobbit and The Lord of the Rings trilogies three-time Academy Award®-winning filmmakers Peter Jackson, Fran Walsh and Philippa Boyens, who have penned the screenplay. The Universal and MRC adaptation is from the award-winning book series by Philip Reeve, published in 2001 by Scholastic.

Courtesy of Paramount, I have a copy of Interstellar 4K Blu-Ray Edition for one (1) lucky winner!

Contest is open to US residents only. No PO Boxes please. To enter, just fill out the form below. Contest ends January 5. I’ll draw a name on January 6, and notify winner via email.

“A New Artistic Challenge”
by D.B. Jackson/David B. Coe

Today marks the release of my first short fiction collection.

Tales of the Thieftaker brings together eleven short pieces I have written over the past several years in the “universe” of my Thieftaker Chronicles, a historical urban fantasy series set in pre-Revolutionary Boston (Thieftaker, Thieves’ Quarry, A Plunder of Souls, and Dead Man’s Reach, all from Tor Books). The collection includes some previously released work, as well as pieces that have never before been published.

Among the stories in the latter category is “The Ruby Blade,” a full-length novella that serves as the centerpiece of the book.

Those familiar with the series will recognize that title: The Ruby Blade was the privateering ship on which Ethan Kaille, my thieftaking, conjuring protagonist once served. A mutiny aboard the vessel in 1745 resulted in his court-martial and imprisonment. He served fourteen years at hard labor on a sugar plantation in Barbados, a living hell that left him broken, both physically and emotionally.

Beginning with the first novel of the series, the mutiny was a touchstone of Ethan’s backstory, something referenced in the books again and again, but never fully described. For years, fans of the Thieftaker Chronicles have asked me about the Ruby Blade, wondering when I would get around to writing that episode of Ethan’s life. So, when I decided to publish Tales of the Thieftaker, I knew I would have to include this particular story. I also knew, though, that I didn’t simply want to write that old tale and slot it into the collection. Instead, I found a way to blend it with a new mystery, and to set it in the days after the end of the final book in the series.

I should pause here to say that while I consider myself a novelist, and am best known for my longer work, I love writing and reading short stories. I enjoy the challenge of shaping a complete tale in a limited number of words. I often learn something new about my craft when reading short work from my colleagues and seeing how they approach this task. And more than any other series I’ve written, the Thieftaker Chronicles has lent itself to short fiction.

But in the case of “The Ruby Blade,” I faced some unique challenges, and that is always good for an artist. For one thing, I was writing Ethan’s “origin story,” which I found daunting. I had been asked about this episode in Ethan’s background for so long, and my readers had expressed such eagerness to read it, that I felt more pressure than I have for perhaps any other work in my career. Beyond that, I knew that the story would be an odd length. Each Thieftaker novel comes in at about 100,000 words. Most short stories come in at about 6,000 words. The former would have been far too long for the story I wanted to tell; the latter far too limiting.

A novella, by definition, falls in between the two lengths–according to most definitions, a novella is any story between 17,000 and 40,000 words. Three bits of trivia: 1) At 7,500-17,499 words, a novelette falls in between a novella and short story. Who knew? 2) This particular novella, “The Ruby Blade,” came in a hair longer than 40,000. Technically, it’s a really, really short novel. Shhh. Don’t tell. And 3) Before this, I had never written a novella.

That last piece of trivia proved to be the greatest of the challenges I encountered. A novel tends to have a certain rhythm, defined in a sense by chapters. Write twenty books or so, and you kinda get a feel for how they ought to flow. By the same token, the pacing of a short story is distinctive as well. You can’t be nearly as leisurely spinning a yarn in a short piece as you can in a full-length book. I’d had plenty of experience with this, as well. But in this instance, I was writing neither a novel nor a short story, and so had to discover a new cadence for my storytelling.

The method I chose for telling this tale, facilitated the development of that unique rhythm. As I said before, “The Ruby Blade” is, in essence, two stories in one. Courtesy of Ethan’s long-time nemesis and rival in thieftaking, Sephira Pryce, he is presented with a new mystery in the winter of 1771. But in order for them to solve this case together, he must first relate to her the events of 1745 that led to the mutiny. The story shifts between the two time periods, and those transitions provide cadence and tension that make both strands of the plot work.

I find writing any sort of story akin to piecing together a puzzle. The shape and size of the puzzle may change with each new work, but usually the process remains much the same. Tackling this novella proved different. Everything felt new again, and that made the writing especially exciting. This story forced me to rethink my process a bit, to adjust my strategy for shaping narrative and character arc. And the truth is, having written one novella, I can’t wait to try my hand at another. I find the whole writing process much easier if I’m able to shut myself off from outside distractions, which is why I’m keen to designate an area of my home as an office space for myself where I can focus solely on my work. I’ve looked at a website where I can get office chairs today, amongst other items of furniture, and I’m really starting to envision what I could create – it’s quite exciting. I’m sure, going into the future of my literary career, this office space could actually prove very useful indeed.

*****
David B. Coe/D.B. Jackson is the award-winning author of nineteen fantasy novels and as many short stories. As David B. Coe, he writes The Case Files of Justis Fearsson, a contemporary urban fantasy from Baen Books consisting of Spell Blind, His Father’s Eyes, and Shadow’s Blade. As D.B. Jackson, he writes the Thieftaker Chronicles, a historical urban fantasy from Tor Books that includes Thieftaker, Thieves’ Quarry, A Plunder of Souls, and Dead Man’s Reach. Tales of the Thieftaker, his first short fiction collection, has just been released by Lore Seekers Press.

David is also the author of the Crawford Award-winning LonTobyn Chronicle, which he has recently reissued, as well as the critically acclaimed Winds of the Forelands quintet and Blood of the Southlands trilogy. He wrote the novelization of Ridley Scott’s movie, Robin Hood. He is currently at work on several new projects including more short fiction, a media tie-in, and a time travel/epic fantasy trilogy. David’s books have been translated into a dozen languages.

He lives on the Cumberland Plateau with his wife and two daughters. They’re all smarter and prettier than he is, but they keep him around because he makes a mean vegetarian fajita. When he’s not writing he likes to hike, play guitar, and stalk the perfect image with his camera.

Courtesy of Scholastic, I have a review copy of Ink by Alice Broadway for one (1) lucky winner!

Contest is open to US residents only. No PO Boxes please. To enter, just fill out the form below. Contest ends January 5. I’ll draw a name on January 6, and notify winner via email. 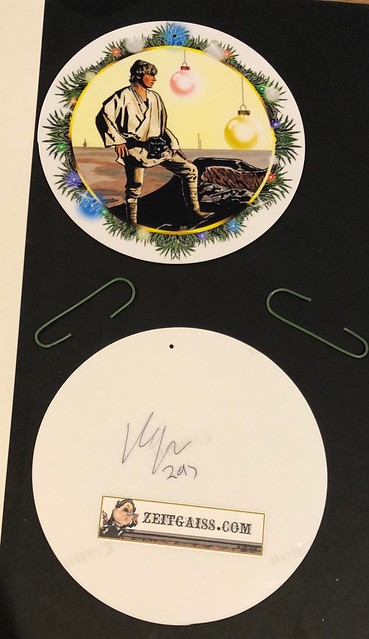 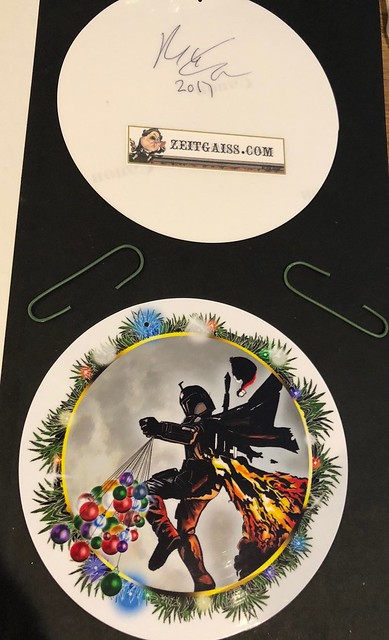 Mike Gaiss from zeitgaiss.com has an Etsy shop with original artwork available as stickers, Christmas ornaments, and magnets for sale. I was offered the above samples to review. These four-inch Luke and Boba Fett ornaments are printed on matte photo paper and laminated on front and back. They are signed by the artist. And hole punched, with the hook included.

I like the Luke one, but the Boba Fett is really great artwork. They’d look really nice on a ceramic ornament. These are going on my tree dedicated just to Star Wars.

Synopsis:
Before Assassin’s Creed: Origins, there was an Oath.

Egypt, 70BC, a merciless killer stalks the land. His mission: to find and destroy the last members of an ancient order, the Medjay – to eradicate the bloodline.

In peaceful Siwa, the town’s protector abruptly departs, leaving his teenage son, Bayek, with questions about his own future and a sense of purpose he knows he must fulfill.

Bayek sets off in search of answers, his journey taking him along the Nile and through an Egypt in turmoil, facing the dangers and the mysteries of the Medjay’s path.

Review:
Bayek wants to follow in his father’s footsteps as a Medjay, a protector of their ancient beliefs. But an assassin is hunting the last of the Medjay line, and will stop at nothing to exterminate them all.

Desert Oath is a prequel to the Assassin’s Creed Origins video game and set in Ancient Egypt. I don’t play video games, but I love the Assassin’s Creed series through the books, comics, and film. And despite being a prequel, this also works well as a standalone story. Though, I did look up who the historic Medjay were. The variety of historical time periods in Assassin’s Creed is one of the things I love about the series. The narrative switches between Bayek and the killer for the most part. The killer is ruthless and captivating. This original story is full of suspense and adventure and builds to an exciting finale.