BURBANK, CA (February 5, 2020) – After eight remarkable seasons, Warner Bros. Home Entertainment and DC mark the end of an epic era with its final installment of the suspenseful and action-packed series with the release of Arrow: The Eighth and Final Season on Blu-ray & DVD April 28, 2020. Get ready for nonstop action from start to finish with all 10 action-packed episodes from the eighth and final season, plus the show’s 2019 Comic-Con Panel, the broadcast special Arrow: Hitting the Bullseye and deleted scenes! A limited edition bonus disc featuring all five DC Crossover Event: Crisis on Infinite Earths episodes will be available exclusively for fans who purchase the Blu-ray. Arrow: The Eighth and Final Season is priced to own at $24.98 SRP ($29.98 in Canada) and $29.98 SRP for the Blu-ray which includes a Digital Code (U.S. only), ($39.99 in Canada). Arrow: The Eighth and Final Season is also available to own on Digital via purchase from digital retailers.

Synopsis:
Following the arrival of The Monitor, Oliver Queen left his home, his family, & his team behind to take on his most challenging battle yet, knowing the cost may be his life. But this time it’s not just his city he’s seeking to protect – it’s the entire multiverse! Oliver’s quest will send him on a journey where he is forced to confront the ultimate question: what is the true cost of being a hero?

DIGITAL:
The eighth and final season and the Complete Series of Arrow are currently available to own on Digital. Digital allows consumers to instantly stream and download all episodes to watch anywhere and anytime on their favorite devices. Digital is available from various retailers including iTunes, Amazon Video, Google Play, Vudu, PlayStation, Xbox and others. A Digital Code is also included in the U.S. with the purchase of specially marked Blu-ray discs for redemption and cloud storage.

Synopsis:
In season two, following the aftermath of their encounter with Trigon, Dick reforms the Titans. Under his supervision in their new home at Titans Tower, Rachel, Gar, and Jason Todd train together to hone their hero abilities and work together as a team. They are joined by Hank Hall and Dawn Granger aka Hawk and Dove and Donna Troy aka Wonder Girl. Although these original Titans attempt to transition into a regular life, when old enemies resurface, everyone must come together to take care of unfinished business. And as this family of old and new Titans – including Conner Kent and Rose Wilson – learn to co-exist, the arrival of Deathstroke brings to light the sins of the old Titans which threaten to tear this new Titans family apart once more.

Review:
Season 1 of Titans introduced all of the characters and gave us the main villain of Trigon. This season, the main villain is Deathstroke, the seemingly unkillable assassin. I enjoyed this season a lot more, and not just because the Deathstroke was more than just one-dimensional. There was a lot going on. It actually felt like more than 13 episodes. There was a lot of story told in the past, when we get to meet Aqualad, however briefly. And we learn about Dick’s sins of the past as they come back to haunt the current team of Titans. And we’re introduced to a couple of new Titans (who happen to be favorites of mine) – Rose and Conner, who both have some deep-seeded daddy issues.

The strength of this season is definitely the character development, as the story can be a little convoluted and hard to follow at times. There is definitely some adult content, though it could easily be cut out and not necessary to the story. As a team this new group of Titans have yet to really come together except for a couple scenes. I hope that season 3 will continue the strong character writing and give the team a foe that can handle them all teaming up. I’m enjoying the direction this team is going.

Synopsis:
Decades after Sarah Connor (Linda Hamilton) prevented Judgment Day, a lethal new Terminator is sent to eliminate the future leader of the resistance. In a fight to save mankind, battle-hardened Sarah Connor teams up with an unexpected ally (Arnold Schwarzenegger) and an enhanced super soldier to stop the deadliest Terminator yet. Humanity’s fate hangs in the balance in this action-packed thrill ride from Tim Miller, the Director of Deadpool, and Producer James Cameron.

Review:
This is the Terminator sequel I’ve been waiting for. Linda Hamilton has been missing in all the films since Terminator 2, so it’s only fitting that we ignore all the previous sequels for this storyline. And it works. It’s heart-pounding suspense with heartbreaking drama that only these leading ladies can supply. Arnold is back as well, as Terminator “Carl” who has moved on with life and sees the error of his ways. As a Terminator fan, I thoroughly enjoyed this installment. Certainly more than the previous several installments. There is plenty of fan service, and that’s okay. The action is non-stop and intense. The CGI is fantastic. And there is plenty of heart that keeps viewers invested.

Courtesy of Warner Brothers, I have a DVD copy of The Big Bang Theory: The Twelfth and Final Season for one lucky winner!

Contest is open to US residents only. No PO Boxes please. To enter, just fill out the form below. Contest ends November 29. I’ll draw a name on November 30, and notify winner via email.

About the release:
1939’s acclaimed and beloved classic The Wizard of Oz will be released on Ultra HD Blu-ray Combo Pack and Digital on October 29th. .

Adapted from L. Frank Baum’s timeless children’s tale about a Kansas girl’s journey over the rainbow, The Wizard of Oz officially premiered at Grauman’s Chinese Theater on August 15, 1939. The film was directed by Victor Fleming (who that same year directed Gone With the Wind), produced by Mervyn LeRoy, and scored by Herbert Stothart, with music and lyrics by Harold Arlen and E.Y. Harburg. Ray Bolger appeared as the Scarecrow; Bert Lahr as the Cowardly Lion, Jack Haley as the Tin Woodman. Frank Morgan was seen in six different roles, including that of the “wonderful Wizard” himself. Dorothy was portrayed by a 4’11” sixteen year old girl who quickly earned her reputation as “the world’s greatest entertainer”– the incomparable Judy Garland.

Additionally, moviegoers will be able to experience the magic of The Wizard of Oz like never before, remastered in Dolby Vision with incredible color and brightness, exclusively at select Dolby Cinema locations from October 25 to October 31.

Review:
This is a really fun release. There are a ton of extras I hadn’t seen before. I really enjoyed “the Making of.” And the 4K quality is better than I thought possible on my large TV. In fact, I don’t think I’ve ever even seen it on such a large screen. This is a fantastic version of a beloved family classic. It’s a great story for all ages. I can’t believe I haven’t owned this film before, despite watching it numerous times. 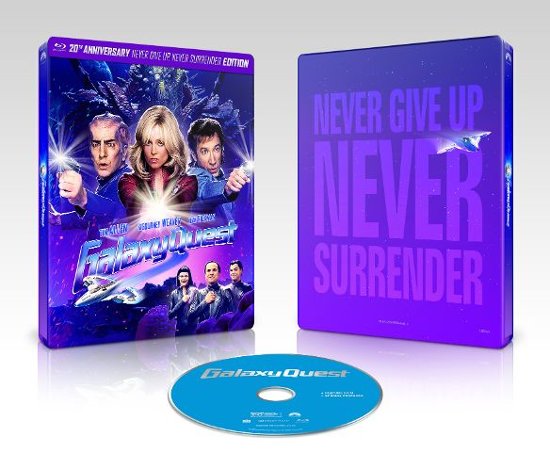 Galaxy Quest Arrives in a Blu-ray™ Steelbook For the First Time on October 22, 2019

About the release:
By Grabthar’s hammer, the intrepid crew of the NSEA Protector is back to celebrate the 20th anniversary of the uproarious classic GALAXY QUEST, arriving in our solar system October 22, 2019 in a Limited Collector’s Edition Blu-ray Steelbook from Paramount Home Entertainment.

Featuring an out-of-this-world all-star cast including Tim Allen, Sigourney Weaver, Alan Rickman, Tony Shalhoub, Sam Rockwell, Enrico Colantoni, Daryl Mitchell and Justin Long, this rollicking send-up of sci-fi fanaticism is as funny today as it was when it premiered in theaters 20 years ago.

The Limited Collector’s Edition Blu-ray Steelbook includes:
• Galactopedia—On-screen information about characters, ships, aliens and more
• Historical Documents: The Story of Galaxy Quest—Cast and filmmakers discuss how the film came together
• Never Give Up, Never Surrender: The Intrepid Crew of the NSEA Protector—Celebrates the incredibly talented cast
• By Grabthar’s Hammer, What Amazing Effects—Explores the effects by ILM and Stan Winston
• Alien School—Creating the Thermian Race—Actor Enrico Colantoni’s process of developing the voice and manner of an alien race
• Actors in Space—Delves into the psyche of the cast
• Sigourney Weaver Raps— Needs no further explanation
• Deleted Scenes
• Theatrical Trailer

I watched this new edition with my nieces. And despite the out-dated special effects, the film holds up and they loved it almost as much as I did. Though, it was hard not to quote the entire movie while watching. I enjoyed the extras too, especially the deleted scenes. And with the documentary releasing next month, this is a timely release to usher in a new generation of fans.