Synopsis:
Caitlin Hext’s first shedding ceremony is imminent, but she’s far from prepared to produce a Snakeskin clone. When her Skin fails to turn to dust as expected, she must decide whether she wishes the newcomer alive or dead.

Worse still, it transpires that the Hext family may be of central importance to the survival of Charmers, a group of people with the inexplicable power to produce duplicates every seven years and, in the process, rejuvenate. In parallel with reporter Gerry Chafik and government aide Russell Handler, Caitlin must prevent the Great British Prosperity Party from establishing a corrupt new world order.

The images were almost entirely black, with only faint sources of light that illuminated the handful of figures. In the first photos the people were all in one corner, as if the photographer had been far away, or as if he or she hadn’t known quite where to point the camera. The people were arranged in a semicircle.
Despite herself, Gerry bent closer. In each successive picture, the figures grew in size. The photographer must have been sneaking towards them, hidden in the darkness.

All but one of the figures had their backs to the camera. Gerry realised that she recognised the woman facing the camera, standing before a fire in an ornate iron brazier. Her build was slighter than the people around her. Her shoulder-length hair shone white.

“She was fifty-two last week,” Zemma said. “You’d never know it, would you?”

“Seriously? Rebecca Verne’s a Charmer?” Gerry already felt foolish for caring. “How has she kept it secret all this time?”

“You know what that industry’s like. Ever since she began as a Pinewood starlet – at a more advanced age than you might expect – she’s been surrounded by an entourage, protected from the real world. Who’s going to let on?”

Throughout Rebecca Verne’s acting career, and despite her glamorous red carpet appearances at premieres and awards ceremonies, she had specialised in down-to-earth roles. She was loved for her empathy and her ability to hold a mirror to people in all strata of society. And all this time, she had been a Charmer. The British public would be outraged. But any sense of unfairness would be overwhelmed by fascination.

“It gets better,” Zemma said. She pushed a few photos aside to reveal the ones at the bottom of the pile.

Now the photographer had reached a position close enough to be able to frame Rebecca Verne perfectly. She wore a long, loose, grey gown studded with pinpricks of bright white – probably sequins, but the effect was that it looked as though her own body were the source of illumination, rather than the fire. Her face was that of somebody half her age. There were no creases or any hint of looseness to the skin.

In the next photo Rebecca was looking up at the sky. Her mouth was open, perhaps in speech.

“Why did she do it outside?” Gerry wondered aloud.

Gerry glanced at the next picture. Now Rebecca’s body really was glowing, but with a greenish light rather than the white of her sequins or the yellow of the fire. The photographer kept her framed within the left-hand side of the image. The right-hand side was empty and black.

Zemma pulled another photo from the pile.

Gerry couldn’t stop herself from gasping.

Rebecca Verne stood beside Rebecca Verne. The originator still faced the sky. The newcomer looked to her right, at the first woman.

And, of course, the Snakeskin Rebecca was naked. Either she was unashamed, or she hadn’t yet the presence of mind to care, but her arms hung at her sides, displaying a taut, pale body. She was beautiful. They were both beautiful.
In the next photo, one of the entourage had already placed a cape around the Snakeskin’s shoulders. The cape still revealed a wide V of the Snakeskin’s flesh, as though it were a designer gown.

“This is the one,” Zemma said, pointing at the next image.

The man with the cloak had retreated again. Now the original Rebecca Verne, the Charmer, had turned to face the newcomer. They regarded each other levelly. Though one wore a shimmering gown and the other a plain black cape, in every other respect they were identical. Even their blond hair was styled in exactly the same manner. Gerry peered at the two faces. If there was a difference, it was in their expressions. The Charmer’s nose tilted upwards very slightly, making her look a touch imperious. The Skin held her head fractionally further back, as if mid-flinch. It was only a faint hint, but she appeared afraid. 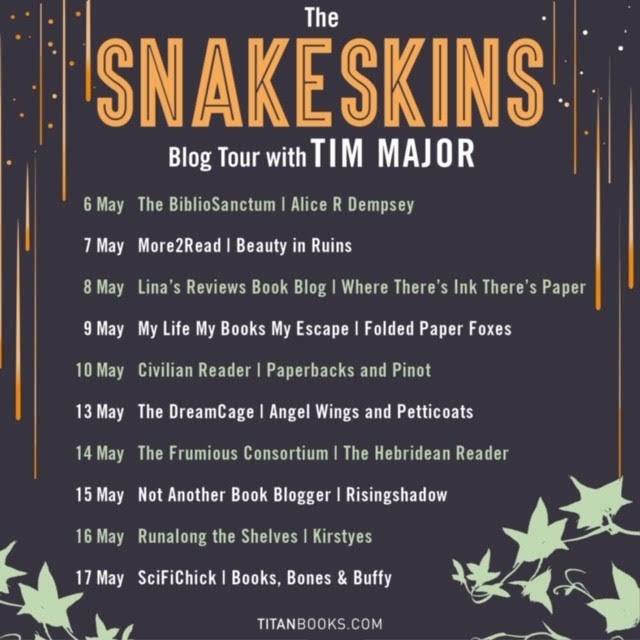