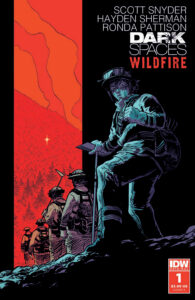 DARK SPACES: WILDFIRE SYNOPSIS
Set six weeks into the slow burn of the historic Arroyo fire, Dark Spaces: Wildfire explores the decisions of a desperate crew of women from an inmate firefighting program on the frontlines. Their newest recruit—a white-collar convict with a deep network of shady dealers—discovers that they’re mere miles from a former associate’s abandoned mansion. Enchanted by a score that would truly change their lives, she proposes a plan to abandon their duties and hunt for riches under the cover of smoke and ash. But with the fire closing in on the forest around them, is this a flicker of fortune or a deadly trap?

Dark Spaces: Wildfire will be published monthly from July through November, with subsequent to-be-announced Dark Spaces storylines debuting in 2023. The first issue of Wildfire will be available with multiple cover variants for retailers and fans to enjoy, featuring artwork by Hayden Sherman, Andrea Sorrentino, Liana Kangas, and Tula Lotay.

ABOUT THE CREATORS
Scott Snyder is a New York Times best-selling author and one of comics’ best-selling writers. He is the recipient of two Eisner Awards, a Harvey Award, an Eagle Award, three Stan Lee Awards, and an Inkpot Award. Snyder made his comic book writing debut in 2009 with Marvel Comics. In 2011, Vertigo and DC Comics published American Vampire, his creator-owned debut with artist and co-creator Rafael Albuquerque. The first story was co-authored by Stephen King and received international acclaim.

Hayden Sherman is an award-winning comic artist whose work includes The Few, Wasted Space, Thumbs, and Old Man Logan. They’re a lover of science fiction and fantasy who have had the joy of illustrating for companies such as Marvel, Image, Dark Horse, Dynamite, AfterShock, Vault, BOOM! Studios, and now IDW Publishing. They currently reside in Boston, Massachusetts, where they share an apartment with their significant other and an increasingly dumb cat.

Review:
The first issue in this new series is an intro to the characters and a tease at the building mystery surrounding a thrilling heist. The art and coloring is perfect for the dark and eerie feel. This group of female, convict firefighters are intriguing. And the premise is fresh and foreboding. The first issue definitely has me wanting more and looking forward to the rest of the story.