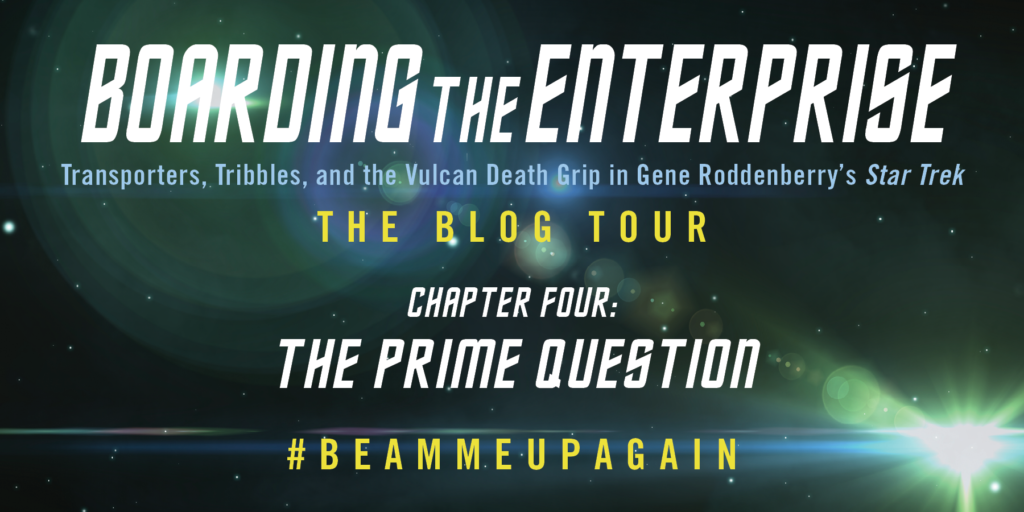 Excerpt from Boarding the Enterprise, the Anniversary Edition:
“The Prime Question” by Eric Greene

Eric Greene played the alien child Loki on the 1977 Saturday morning SF series Space Academy, which also starred Pamelyn Ferdin and Brian Tochi, who had guest starred in the Trek episode “And the Children Shall Lead.” He went on to write the brilliant critical study Planet of the Apes as American Myth: Race, Politics and Popular Culture, and to work for the American Civil Liberties Union. We could think of no one better qualified to look at Star Trek’s relation- ship to the real world of the 1960s.

We had the overarching authority of science fiction and we could go anywhere with that and under that guise we could also talk about the issues of the day…. The war in Vietnam… no one was allowed to talk about on television if you had a contemporary show, but under sci- ence fiction we were able to get in commentary on Vietnam.

Has a war been staged for us, complete with weapons and ideology and patriotic drum beating? Even… race hatred?

In its forty years Star Trek has become a legend. As the legend would have it, Star Trek derives its popularity from its positive view of the future, a future in which humanity has overcome poverty,  prejudice and war, reached out to alien species and joined with them in a United Federation of Planets to explore the stars in peace and friendship.¹ Camelot in outer space.

More than an exciting concept for a series, this is an inspiring prospect for humanity. Like any mass media project, Star Trek was many things: entertainment, a livelihood, art, product. But it was also a bold attempt, conceptually, to burst open an unoccupied space—the future—and shape its contours. It was a bid to create that future by suggesting what it might look like, how it might function and what values it should embrace. That must be why the show struck such a nerve, right? Yes. But there was more to it than that. There always is.

Like Arthur’s Camelot, or, more to the point, Kennedy’s Camelot, the legend of Star Trek and the history of Star Trek overlap but also diverge. The legend represents an appealing and important piece of Star Trek’s success but overlooks other essential truths. Star Trek was not only a vision of a utopian future; it emerged from, described and addressed a fractured, violent present.

I by no means want to dismiss  the positive  vision  that  was such  an important element of Star Trek. In my own case, for example, as a kid watching Star Trek in the ’70s, the image from the show that most excited me—more than  the colorful  bridge,  the magical  transporter or even the elegant starship—was the briefing room. That’s right, the briefing room. Just a table and some chairs. “The briefing room,” you might ask yourself, “a table and some chairs? That certainly doesn’t sound exciting. What could possibly be so exciting about that?” But I remember taking the worn copy of Stephen Whitfield and Gene Roddenberry’s Making of Star Trek paperback that I shared with my older brother Jeff (the  person  who earned  my everlasting  gratitude for introducing me to Star Trek—and all that came with it), staring at the picture of the conference room set and marveling at the memory  of Captain Kirk looking around at those gathered together of different races, species and specialties and saying to them, “I want options.”

¹ Leonard Nimoy provides one of the most articulate versions of this view explaining that Star Trek “was always a very humanistic show; one that celebrated the potential strengths of mankind, of our civilization, with great respect for all kinds of life, and a great hope that there be communica- tion between civilizations and cultures.” (Quoted in Greenwald, Jeff. Future Perfect: How Star Trek Conquered Planet Earth. New York: Penguin Books, 1998, p. 111.)

Something about that seemed encouragingly democratic, meritocractic, American. That conference room was where  decisions were made, and destinies were shaped—where all that mattered was if you had the brains and imagination to sit with the best and the brightest, think through problems and create solutions. The position you earned counted. The wealth of your parents, the color of your skin, did not. That’s a pretty powerful idea when you are seven years old, and I suspect I’ve carried the image of that briefing room with me into committee meetings, board rooms and conference tables throughout my adult life.

But the picture of that idealized briefing room was not the whole picture of Star Trek. This complex series had its share of contradictions: yes, the show featured a groundbreaking mix of ethnicities and nationalities and featured many guest stars of color in nonstereotypical parts,

even playing authority roles;² yet the recurring actors of color were kept in subordinate parts (as the TV satire In Living Color would brilliantly lampoon twenty years later). Yes, the show featured aliens who while initially feared as monsters, were eventually understood as beings who were just trying to defend their homes, protect their children or survive as a species; however, the Federation and Starfleet were largely “homo sapiens only” clubs.³ Yes, the show featured TV’s first interracial kiss, but that was hardly a breakthrough: Kirk and Uhura were forced into that kiss—it was desired by neither and resisted by both. And a Black woman forced to kiss a White man against her will ain’t romance. It’s rape. And a kind of rape with a disconcerting resonance in a country in which, for the majority of its history, Black women were subject to the sexual depredations of White slave holders.4

²Indeed African American actors were repeatedly cast as doctors, scientists, even commodores. This casting diversity seems to have been quite by design. While Gene Roddenberry had to fight for the inclusion of the alien Mr. Spock, an August 17, 1965 letter from NBC executive Mort Werner to Gene Roddenberry explained that NBC’s non-discrimination policy included encouraging the casting of racial minorities in order to reflect accurately U.S. population demographics and that “mindful of our vast audience and the extent to which television influences taste and attitudes, we are not only determined but anxious that members of minority groups be treated in a manner consistent with their roles in our society.” (Letter reprinted in Solow, Herbert F. and Justman, Robert. Inside Star Trek: The Real Story. New York: Pocket Books, 1996, pp.76–77.)

³ As a Klingon would pointedly observe in Star Trek VI: The Undiscovered Country, in an admirable instance of those who made Star Trek actually challenging the legend themselves.

4 What’s actually striking about that much-hyped scene is not the obviously faked kiss (you never really see their mouths touch), but the surprising level of emotional intimacy in the dialogue leading up to the kiss. And that was not forced.

Courtesy of BenBella Books, I have a copy of Boarding the Enterprise, the Anniversary Edition by Charlaine Harris for two (2) lucky winners!

Contest is open to US residents only. No PO Boxes please. To enter, just fill out the form below. Contest ends June 24. I’ll draw a name on June 25, and notify winners via email.