Marvel started experimenting with “enhanced” comic covers, which soon became “Variant” covers and grew in popularity since the ’90s. This fantastic collection is an oversized book full of hundreds of artwork from a variety of titles and artists across 216 full-color pages.

This book spans the past several decades from Marvels’ vast spread of characters. I don’t collect variant covers. But this book is a lot of fun and contains a lot of amazing artwork. It will take me quite a while to go through all of it in depth. There are sections on themes, monsters, characters, and artists. And the centerfold by Daniel Acuna, spreads out across 4 pages. This would be a great gift for Marvel fans. It’s definitely a collector’s item. It’s an impressive collection of stunning artwork with something for everyone.

Greek Mythology: The Gods, Goddesses, and Heroes Handbook: From Aphrodite to Zeus, a Profile of Who’s Who in Greek Mythology by Liv Albert (Author), Sara Richard (Illustrator)

Synopsis:
Greek mythology continues to appear in popular movies and books today but have you ever wondered about where these characters started out? Discover the origins of your favorite characters from Greek mythology with this collection of profiles to tell you who’s who in classical lore!

In Greek Mythology, you will discover the backstories of the heroes, villains, gods, and goddesses that enjoy popularity in today’s shows and films. With comprehensive entries that outline each character’s name, roles, related symbols, and foundational myths, you can get to know the roots of these personas and better understand the stories they inspire today. With this character-focused, handy reference, you will never be confused about Ancient Greece!

Review:
There is a nice introduction that explains the basics of Greek mythology and the basic history. Then, the next section is detail on the Olympian gods and goddesses and what each are known for. They have nice, full-color, artistic representations of each. The third section is on the non-Olympian deities – Titans, minor gods, monsters, etc. Each character has several pages on what they’re known for and any notable stories. And the forth and final section is on the Heroes and Mortals of Greek mythology – some were familiar to me, but several I had never heard of. Bold and colorful illustrations are peppered throughout these sections. I enjoyed the little factoids for most of these lesser-known characters. This makes for a great, quick reference guide for Greek mythology fans or those new to Greek mythology. There’s a lot of information packed in this impressive book.

Synopsis:
After escaping from a watery dungeon in Venice, astrophysics PhD candidate Andromeda ”Andie” Robertson and investigative reporter Cal Miller are whisked to Bologna by a member of the mysterious Leap Year Society. A deadly confrontation with the Society’s bitter rivals, the Ascendants, sends Andie and Cal on the run once again, desperate to solve the Star Phone puzzle so they can reclaim their lives and rescue their loved ones.

Brilliantly juxtaposing a modern-day thriller with a historical search for a missing physicist, REVELATION probes ever deeper into the mounting mysteries surrounding Andie and her past.

What is the source of her strange hallucinations?

What are the true origins of the Leap Year Society and the Ascendants?

How are her mother and her mentor, Dr. James Corwin, involved?

From Italy to India and New York to Buenos Aires, Andie and Cal risk their lives to probe a secret world hidden in plain sight, drawing closer to answers that will determine not only their own fates, but who controls a new frontier of knowledge.

Review:
This is the 2nd installment in a planned trilogy involving 2 affiliated secret organizations. Although, one seems to stop at nothing to get want they want. Andie and Cal are now on the run and trying to hunt down clues before their followers can. With intermittent chapters following Dr. Corwin’s journey in the 70s-80s on his original hunt for an elusive device.

Fast-paced and heart-pounding suspense paired with clever clues and fringe science made this another fantastic read. Fans of Dan Brown thrillers should check this series out. The overall mystery is evolving slowly, with several surprises along the way. Exciting suspense is paired with drama and a bit of romance as well. A lot is packed into this sequel. And another cliffhanger ending left me impatient for the final novel in this captivating trilogy.

STARGATE SG-1: Female of the Species by Geonn Cannon

Synopsis:
Vala Mal Doran, SG-1’s newest recruit, simply can’t ignore the plea for help she receives from her old friend, Tanis Reynard. And with vital intel up for grabs, Vala ensures SG-1 can’t ignore it either.

However, as the mission quickly unravels, Colonel Carter and Vala find themselves bound for the ‘inescapable’ prison world Viaxeiro Caldera, leaving Colonel Mitchell, Teal’c, and Dr Daniel Jackson to mount a rescue. Meanwhile, Sam and Vala uncover a sinister secret on Viaxeiro which means they will have to overcome their personal rivalries and learn to work together to bring down the insidious faction which controls the prison world – preferably before their true identities are discovered.

By the time Mitchell and the rest of SG-1 reach Viaxeiro, it’s anyone’s guess who’s rescuing whom in this rip-roaring Stargate adventure.

Review:
When I recently rewatched the entire series of SG-1 on Netflix, I loved Vala’s character a lot more this time around. So, I was eager to read another story with Vala and Carter as the central characters. While they are sent to an “inescapable” prison, these resourceful women don’t sit around and wait to be rescued. They learn as much as they can, and uncover a dark secret on the planet, and begin to form a plan. Meanwhile, the rest of the team use all of their resources just to find the prison planet.

I loved every bit of this well-paced novel, full of intrigue, humor, drama, and a seemingly impossible situation to escape. It’s just like an exciting episode from the series. The characters are spot on. The plot is fun and engaging. And the thrilling, climactic finale doesn’t disappoint. Fans of the show shouldn’t miss this adventure.

Courtesy of Titan Books, I have a copy of Birds of Paradise by Oliver K. Langmead for one lucky winner!

Contest is open to US residents only. No PO Boxes please. To enter, just fill out the form below. Contest ends April 15. I’ll draw a name on April 16, and notify winner via email.

Synopsis:
1902. Wounded in the Boer War, Jane Eyre returns to a London transmogrified by emerging modernity. An old friend, the glamorous inventor Lady Havisham, introduces her to the American adventuress Irene Adler, and the two seek lodging together. But Adler is engaged in a brutal secret war against a mortal enemy of the British Empire: Ayesha, She-Who-Must-Be-Obeyed, who seeks revenge against the colonizers who destroyed her country. And Jane, not unwilling, is swept up in the case.

As Queen Victoria holds on to her throne with the help of experimental new medicine, Adler and Ayesha both fight for the secret weapon developed by the scientist Madame Curie. And as Ayesha and her amazons (not to mention her pet assassin Carmilla) take over the London underworld, Adler must form a team of determined women to stop them – before the Empire is destroyed.

Review:
Adler is a fun and exciting standalone graphic novel. Fans of Sherlock Holmes will be familiar with Irene Adler. She is an American adventurer, singer, and amateur sleuth in this inspired miniseries. Jane Eyre becomes her Watson, as the two team up to bring down the nefarious Ayesha who wants revenge for her lost country.

There is a helpful cast of characters with a short bio of each. And while the series is called “Adler,” she has a team of talented women, cleverly coined “The League of Extraordinary Gentlewomen.” The artwork is fantastic. I loved the Victorian steampunk look down to the elaborate and unique outfits. I thoroughly enjoyed this fast-paced, thrilling adventure. I’d love to see more Adler graphic novels in the future, as there are endless possibilities with this fresh take on familiar literary characters.

Excerpt from the Graphic Novel (Click on image to enlarge): 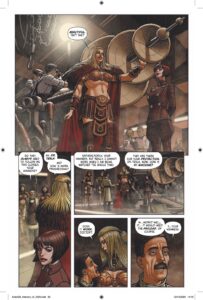