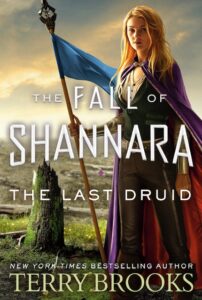 Her eyes were tightly closed—in part to shut out the fury of the storm, and in part to protect her vision. The rain was falling so hard that each drop stung the skin of her face, and she did not want to chance what it might do to her eyes if she opened them. But the darkness allowed her the space and time to regain herself, to recall the events that had led to this moment. Her memory was momentarily fuzzy—a result not only of the blow to her head, but of something more . . .
Tavo!

It all came rushing back in a flurry of terrible images. Drisker, her brother, and herself landing on a rocky shelf high on the cliffs of the Rock Spur at the entrance to Cleeg Hold. Clizia Porse, using her magic to attack them from hiding, striking Tavo so hard he went down in a heap. Drisker rushing to strike back. A gap in time opening as she cradled her brother fearfully, willing him to wake once more. And the storm all around them—the flashes of lightning and the booming of thunder, the darkness and the rain, the overwhelming sense of everything having gone wrong . . .

Then a blow of such force—a strike of dark magic launched by Clizia Porse before either she or Tavo could prepare for it—and she was thrown through the air and over the cliffside into . . .

What had happened to her companions? She had no way of knowing.
Carefully, so as not to jar her position, she lifted one hand to shield her eyes from the rain so she could peer upward. She could see the cliff wall behind her and the rocky projection that had caught the collar of her heavy cloak to stop her descent and hold her fast. A one-in-a-million chance of this happening, and yet it had. Again, she recalled Parlindru’s words, foretelling her future: Three times you shall die, but each time you shall come back to life. Surely, this qualified as one of those times. Was this the last of the three? Tavo had nearly killed her twice, so mustn’t it be?

She forced herself to concentrate, to stop the rambling flow of her thoughts, and to study the rain-slickened rock she must somehow

climb to safety. She could not see the edge she had tumbled over; it was too far above her and lost in blackness. But it didn’t matter. She knew she had to find a way to reach it.

What skill did she possess—what magic—that would allow her to do this? She tried to ignore the aching in her head; the pain made it hard for her to think.

Drisker had helped her to develop a considerable range of talents, and she had taught herself others. Yet she saw no projections on which she could gain any handholds save for the one that had snagged her, and one was not enough. She searched for foliage or vines she might grip, but there was nothing. She could try calling for help, but that would be dangerous. If Clizia was still up there, she might hear—although the sounds of the storm were so furious that she couldn’t imagine anyone hearing anything.

Then, as if in response to nothing more than contemplating the possibility, lightning flashed and a dark figure stood at the edge of the cliff, leaning over. Tarsha’s glimpse of this apparition was fleeting, but she knew instinctively it was the witch. She kept watching. Looking away now would not help; either she had been seen or she hadn’t. So she waited, eyes fixed on the point where she had spied the other woman. Then the lightning flashed again, illuminating the cliff edge, and Clizia Porse was gone.

Tarsha held her breath. Had Clizia seen her dangling against the cliffside? Was she visible from above? She waited, the minutes ticking away in her head. She imagined her death dozens of times over—a drop into the abyss of the canyon, everything brought to an abrupt end. She imagined what it would feel like.

Then she heard a new sound, one she recognized—the whine of power generated from diapson crystals as thrusters engaged and an airship lifted off. The sound heightened then slowly died away as the airship moved farther off. Clizia was gone.

Tarsha waited until she was certain, then cried out for Tavo and Drisker, one after the other, over and over. When there was no response and she realized no help was coming, she knew she was going to have to save herself.

But how could she manage it? Even if there were hand-and footholds to be found on the cliff face, she would have to swing close enough to the rock wall to grab onto them before her cloak tore loose. It was a faint hope at best, but without any way to gain purchase on the cliffside, it was unthinkable.

For a while she just hung there, a steady erosion of any hope breaking down her failing confidence, certain that—with the next gust of wind—she was going to die. She tried to tell herself that she just needed to think it through, that something would occur to her if she did.
But her situation suggested otherwise, and she began to despair.

Then, still running through the list of skills she had acquired while mastering the wishsong’s magic, she paused momentarily when she remembered her ability to appear in one place while actually being in another. Like the Skaar almost, but . . .

She caught herself, stumbling over a possibility that seemed so remote and unlikely that she almost dismissed it out of hand. But desperation forced her to consider it further.

If she could make herself appear to be in one place when she was really in another, might it not be possible to actually move herself elsewhere? To transport herself, in the flesh? Was it not a logical extension of how the wishsong could make the impossible manifest? Logic and life experience told her otherwise, but her understanding had progressed beyond both of these barriers. If necessity was the mother of invention, then why couldn’t her desperation make the impossible real? Just because she had never tried it didn’t mean it couldn’t be done.

And what other choice did she have now?

She closed her eyes once more and began to hum softly, summoning the magic. She had to be very careful. She had to both free herself from her cloak and place herself in virtual form back atop the rocky shelf. And she had to accomplish this and hold it all in place while she took it one step further and moved her corporeal form into her apparition. She was not even sure how she would do this—only that she must find a way.

Even more daunting, she could not experiment, but must make it happen on the first try.

Three times you shall die, but each time you shall come back to life.
Let it be so.

She forced herself to relax, then seized hold of her magic and pictured herself on the precipice somewhere above where she dangled and projected the image that would place her there. Then she closed her eyes to the world and pictured herself lifting upward. Through her singing, she projected what she wanted to happen, making it real by force of will alone. She imagined and then caused herself to lift out of her cloak and into the rain-swept emptiness of air and wind—rising, as a shade might, into the storm, the weight of her body becoming that of a feather. She sang herself clear of her garment, sang her way into the void, so insubstantial that not even the wind and rain and cold were a part of her existence. She gave herself over to her magic, disappearing into the impossible in an effort to make it real, closing off any thoughts of falling or of death.

It seemed to take forever before she felt herself merge with her projected image and allowed herself to become corporeal again. As weight and solidity returned to her form, she was aware of firm ground beneath her feet once more; the hard, rocky surface of the ledge was as real as the shortness of breath that engulfed her the moment her song died away. She stood where she was for long seconds, afraid to look, unwilling to break the spell. It was entirely possible she was only fooling herself and nothing had happened. If she looked, she would know. And if she had deceived herself, she would fall.

She felt as if the world had shifted on its axis—as if something in her life had been upended and nothing would ever be the same again. She opened her eyes . . .

And the truth was there, waiting to welcome her into its arms.