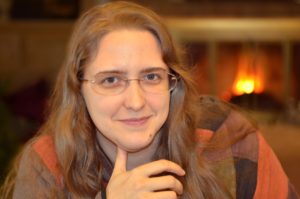 Author Ada Palmer joins SciFiChick.com today to talk about the world from her latest release Too Like The Lightning!

Imagine if such a system came in as suddenly as smart phones, and within a few years it came to be effortless to commute from continent to continent. There would be political and even military consequences (we hear about that phase of history in the background of the story), but it’s easy to see how it would also revolutionize lives, and families. No one would have to choose where to live based on a job anymore, since you could in Bermuda, work in Tokyo and lunch in Paris while a spouse or roommate worked in Buenos Aires and you met for dinner in Antarctica. It’s easy to imagine the real estate upheaval as people rush to buy homes to the most beautiful and exciting parts of the Earth, but that generates another political consequence: a world of expats.

With these flying cars, suddenly living in another country wouldn’t be any impediment to still working and socializing primarily in your birth nation, and a huge portion of Earth’s population would suddenly start living in another country. Or is it really living in another country when you spend only a third of your time there, another third working in a second country, and the rest having fun in every corner of the Earth? And what about children born of parents who are Japanese but bought a home on the French Riviera to grow the view? This happens today with expat couples and immigrants, but if the flying car system came in it would suddenly happen to half or more of all the children in the world, within a generation.

This is the birth of the world of Too Like the Lightning, a world of diaspora, in which all cultural groups are spread all around the Earth, and living in the region where your ancestors lived is the exception, not the rule. It is a world of diaspora, much like the world of the internet where we have friends scattered around dozens of cities, and many of our most important relationships are unrelated to geography. In this 25th century, nations as we know them—geographic nations—are a thing of the past, since now that virtually no children grow up in a place that corresponds to their languages and cultures, a fully mobile global population finds it absurd that, in the olden days of people were governed by the laws the splotch of dirt where they happened to be born. Instead, as part of coming of age, young adults choose freely among several globe-spanning borderless nations, selecting the ones whose culture, policies and ideology are most personally appealing. Adults live by the laws of their chosen nations no matter where on Earth they reside, and what is legal or illegal in one house may be completely different from the house next door, depending on the choices of the family.

This world of diaspora is a fantastic place to explore political interaction, and especially cultural interaction. When you start Too Like the Lightning you’re plunged into a whirlwind mix of different races and languages, a detective from Alexandria investigating a break-in in Chile affecting a family with Chinese, Indian and Mestizo members and political effects on Japan and Paris. But this isn’t an exotic jet-set, this is normal life in this world of diaspora, when there are no majorities anywhere on Earth, just dozens of minorities mixing coequally in every space. It’s an amazing plunge, and an amazingly dynamic space in which to see how one mystery can sweep through and touch every corner of such an interconnected world.

About the author:
Ada Palmer is the author of the recently released sci-fi novel Too Like the Lightning and a professor in the history department of the University of Chicago, specializing in Renaissance history and the history of ideas. Her first nonfiction book, Reading Lucretius in the Renaissance, was published in 2014 by Harvard University Press. She is also a composer of folk and Renaissance-tinged a capella music, most of which she performs with the group Sassafrass. Her personal site is at adapalmer.com, and she writes about history for a popular audience at exurbe.com and about SF and fantasy-related matters at Tor.com.