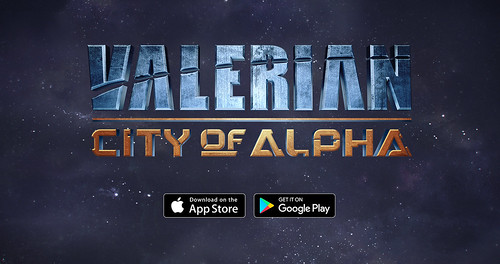 To celebrate the mobile game release of VALERIAN: CITY OF ALPHA, the official mobile game of the feature film Valerian and the City of a Thousand Planets, Spil Games is offering us a giveaway!

It is the official mobile game of Luc Besson’s upcoming sci-fi movie Valerian and the City of a Thousand Planets starring Dane DeHaan and Cara Delevingne. The legendary director is famous for creating sci-fi blockbusters including The Fifth Element and Lucy.

The film has been described as visually spectacular and the mobile game creates an engaging experience that will draw players into the Valerian universe.

Valerian: City of Alpha was built from the astonishingly intricate backstory created for the movie. Gamers get to explore that super cool universe for themselves.

“Spil Games has successfully captured our movie in a mobile game,” says Virginie Besson-Silla, the movie’s producer. “What we see is an immersive experience that Valerian fans will have fun with.”

The movie is set on the astonishing City of Alpha — an ever-expanding metropolis where species from all over the universe have converged over centuries to share knowledge, intelligence and culture with one another.

The mobile game begins 590 years earlier when Alpha is still just a space station. The aim is to explore and discover the aliens and planets that will come to be featured in the movie. Players must complete exciting missions, connect with alien species and come up with strategies to help them create the knowledge-sharing metropolis. The ultimate objective is building for themselves the biggest and best version of the City of Alpha.

Much more than just a game of a movie

• Revel in stunning artwork
• Explore the entire universe in which the movie is set
• Connect with mind-blowing alien cultures and snag their technologies
• Create the Alpha metropolis — your imagination is the only limit
• A unique combination of city building, exploration and diplomacy 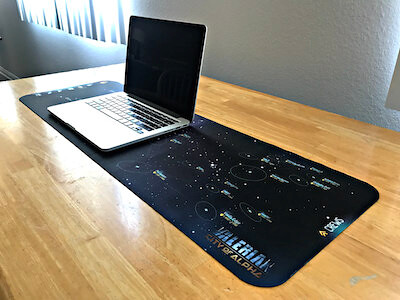 Courtesy of Spil Games, I have a Mousepad and Print (see above) for one (1) lucky winner!

Contest is open to US residents only. No PO Boxes please. To enter, just fill out the form below. Contest ends August 18. I’ll draw a name on August 19, and notify winner via email.

I don’t do a lot of game reviews, as I don’t play a lot of games – mostly just the occasional one on my iPhone. The Tribez was one, so when The Tribez & Castlez released, I decided to check it out. It’s a free game with in-game purchases available to speed up gameplay. It’s highly addicting, but not one that I have to continually play. I can leave it for a few hours (or days) and come back without losing anything. As with most city building games, when you first start out, there’s a lot to do and you level up quickly. After a day or two of play, it slows down to 30 minutes or more between play. Great for the casual gamer.

The Details:
Game Insight, a global leader in mobile/social games, is pleased to announce that the next chapter in city building games, The Tribez & Castlez, is now available for download for iOS and Android devices from the Apple App Store and Google Play. The Tribez & Castlez is a spin-off of the worldwide smash hit The Tribez, which has garnered more than 14 million players worldwide.

Tribez & Castlez is a time-travelling adventure

Baen Books has put out a free online game that lets players earn free ebooks. It’s called Planet Baen (at PlanetBaen.com). It’s a thinker’s game, where you’re the leader of a group of space colonists building a settlement on a distant planet. You get to set your own politics, and your choice of politics affects … Read more