The Librarians and the Mother Goose Chase by Greg Cox

Synopsis:
Stories have power.
In 1719, Elizabeth Goose published a collection of rhyming spells as a children’s book, creating a spellbook of terrifying power. The Librarian of that age managed to dispose of all copies of the book except one, which remained in the possession of Elizabeth Goose and her family, temporarily averting any potential disaster.

Now, strange things are happening around the world. A tree-trimmer in Florida is blown off his elevated perch by a freak gust of wind, a woman in rural Pennsylvania is attacked by mutant rodents without any eyes, and a college professor in England finds herself trapped inside a prize pumpkin at a local farmer’s market. Baird and her team of Librarians suspect that the magic of Mother Goose is again loose in the world, and with Flynn AWOL―again―it is up to Cassandra, Ezekiel, and Stone to track down the missing spellbook before the true power of the rhymes can be unleashed.

Review:
As the seasons of The Librarians are much too short, it’s nice to have these novels as something to tide me over. Eve, Jacob, Cassandra, and Ezekiel are the Librarians in charge of hunting down magical objects wreaking havoc on the general population. A slew of strange happenings all relating to nursery rhymes has the team splitting up to investigate each encounter. And the team must hunt down the missing pieces of Mother Goose’s magical book before more chaos ensues.

Cox is a great tie-in writer and has really captured these beloved characters. This fast-paced adventure is everything I’ve come to expect from the show: plenty of adventure, magic, mystery, and humor. I don’t think I’ll ever look at these Mother Goose rhymes the same again. I thoroughly enjoyed this fun and inspired story with several surprises along the way.

Synopsis:
Based on the 26-volume book series by Terry Brooks, The Shannara Chronicles tells the epic story of an Elvin princess, a bandit, and a half-Elf tasked with stopping the end of the world. Created and executive produced by Alfred Gough & Miles Millar (‘Smallville’) and executive produced by Jon Favreau (Iron Man), the series is shot against the epic landscapes of New Zealand.

Review:
The Shannara Chronicles is loosely based on novel The Elfstones of Shannara by Terry Brooks. And I do mean “loosely.” While the first episode does feel very reminiscent of the book, it doesn’t take long before the story veers off with different characters and new story lines. And even some of the main characters meet different fates.

Hardcore fans of the novels may not be happy with the path this this series takes. But the story does still loosely follow, with many similar characters, stretching a book into 10 1-hour episodes. This series is on MTV, so not-surprisingly there is plenty of angst and it’s more sexualized compared to the book. To the point of ridiculousness at times. But overall, it’s an action-packed, dark, and dramatic series full of bold characters, grotesque creatures, and arcane magic. Some of the episodes drag a bit, but for the most part I did enjoy most this season. The end leaves off where the book did. So I’m guessing next season would be a fresh new story not found in the books, and that may be a good idea if they stray so far from the source material anyway.

The DVD set was released in June. And finally, the Blu-Ray set releases today! The quality is better and pretty noticeable. If fans have been holding out, this latest set is worth the wait. It even comes with a cooler cover design.

The truth is…Still out there! “The X-Files” – The Event Series arrives on Blu-ray, DVD and Digital HD today! Also, the Complete Series Blu-ray Boxset featuring every season is also available today. 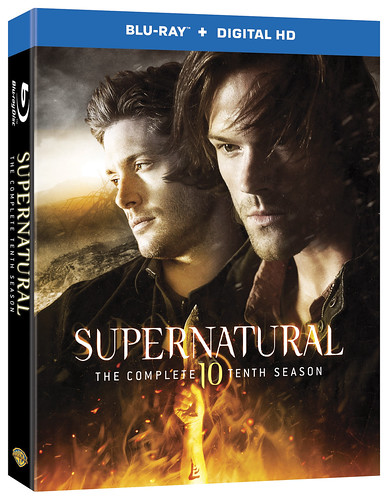 Synopsis:
After Dean Winchester lost his battle with power-mad angel scribe Metatron last season, he was resurrected by the power of the First Blade and transformed into a demon, cursed with the Mark of Cain. The road to recovering wayward Dean takes brother Sam down sinister paths himself, with consequences that will shake the boys to their core. The Winchesters’ angelic comrade-in-arms Castiel must pick up the pieces in the aftermath of Metatron’s campaign to overtake Heaven. With his divine “grace” failing and rogue angels still loose, Cass faces the ticking clock of his own mortality while all-new and ages-old threats again push our heroes to their human and otherworldly limits. At the same time, the King of Hell, Crowley, must deal with dissension within his own twisted family. Supernatural: The Complete Tenth Season will unleash your inner demon and hold you spellbound.

Synopsis:
The Vampire Diaries continues its sixth season with more delicious drama to sink your teeth into. In season five, after a passionate summer with Damon, Elena headed to Whitmore College with Caroline, not knowing Bonnie sacrificed her life for Jeremy’s. Meanwhile, Stefan and Caroline’s friendship deepened as they stood up to the Travelers, a nomadic witch tribe driven to strip Mystic Falls of magic and cast out its supernatural residents. In the shocking season finale, Damon, fearing he would lose his loved ones on the crumbling Other Side, made a huge sacrifice to bring them all back — with catastrophic and heartbreaking results. Season six follows the characters’ journey back to each other as they explore the duality of good versus evil inside themselves. Matt Davis reprises his role as Alaric Saltzman, recently returned from The Other Side. Plus, the season will make you misty-eyed as the departure of a major character will turn lives upside down and leave us asking what happened to Mystic Falls.

Review:
Big changes happen in this sixth season. Bonnie and Damon are stuck in an (seemingly) empty world stuck decades in the past. The two that hate each other the most are forced together and begin forming a strange relationship. One that will have a big affect on the season finale. The Big Bad Guy this season changes up a bit as well. From a psychotic, power-hungry brother to a surprising return of an old family member, then back again.

No one stays the same for long in Mystic Falls. Even Caroline takes a walk on the Evil side after a heartbreak she can’t handle. This season is full of surprises, mystery, heartbreak, romance, and more heartbreak. Knowing that Nina Dobrev would be leaving, meant that there would be an end to Damon and Elana – my favorite couple. It was a bummer knowing it was coming, but there are so many other strong characters and so many other stories to tell – that I have no doubt the writers can keep the show going without their central character. Caroline and Stefan have great chemistry, and they’ve barely begun. Bonnie’s back, and she and Damon have something… so who knows. We lost Jeremy, but got Alaric back – which was fantastic. I can’t wait to see what the next season holds.

Synopsis:
As Original vampire-werewolf hybrid Klaus Mikaelson returned to the vibrant, supernaturally charged city of New Orleans in season one, he was stunned to learn — along with his siblings Elijah and Rebekah — that Hayley, a werewolf, was pregnant with his child, and his vampire protégé, Marcel, whom the Original siblings had thought long dead, was ruling the French Quarter. Soon, a bloody war escalated between vampires and witches — the stakes raised by powerful teenage witch Davina and by Klaus’s bond with Cami, a student with a painful past — and a ruthless pack of wolves seized the opportunity to stage a violent coup. Now, in season two, a new status quo must be adjusted to, as the newly empowered werewolves control the city. Klaus struggles with weaknesses as Elijah desperately tries to save Hayley — now a hybrid — from a vicious spiral of self-destruction. Meanwhile, with the re-emergence of several Mikaelsons, “family is power” takes on new meaning.

Review:
The first season of The Originals centered on the rise of the witches in New Orleans. This season, Klaus’ baby is central – keeping the baby hidden and safe. Meanwhile, the witches are still at war with the vampires. And because of the baby, there is an uneasy alliance between the werewolves and vampires. Some of the missing (and dead) Mikaelsons come back in some form or another, but Klaus doesn’t trust any of them.

The Originals just keeps proving that it’s one of the best shows on television. And this second season heats up with new characters, more backstory for the Mikaelsons, and familiar characters in other bodies… My only complaint was that I was ready for the real Rebecca to come back (Original form). She’s a great actress and character; and other actors just can’t pull it off as well. Just like no one else could play Klaus. He is easily one of the most complex characters on the small screen.

This show is full of suspense, horror, romance, magic, and clever twists. The writers for this show never disappoint. And I can’t wait for the next exciting season.