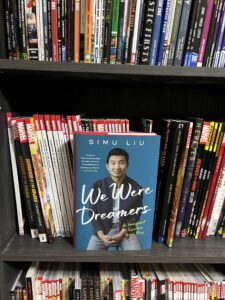 We Were Dreamers: An Immigrant Superhero Origin Story by Simu Liu

The star of Marvel’s first Asian superhero film, Shang-Chi and the Legend of the Ten Rings, tells his own origin story of being a Chinese immigrant, his battles with cultural stereotypes and his own identity, becoming a TV star, and landing the role of a lifetime.

Review:
As a fan of both Shang-Chi and Kim’s Convenience, I was excited to read Simu Liu’s autobiography. I follow him on Twitter, so I know he has a great sense of humor outside of his characters as well.

Readers get a real and important look at Simu and his family’s beginnings and their eventual move to Canada. It’s an important and poignant look into the lives of immigrants and how Westerners often treat them. And it’s an emotional roller coaster of love, heartache, humor, and inspiration as Simu guides us through his school years into adulthood. He’s a fantastic writer and storyteller, as well as a talented actor. And I loved that he maintains a sense of real humility and honesty despite his recent successes. He remains relatable and extremely likeable. And as he reaches the end of the book, as he takes on the mantel of one of my new favorite superheroes, I actually got a little choked up and wish it hadn’t ended there. Fans of this inspiring man will definitely want to pick up his captivating, life story.