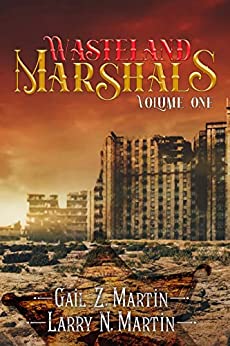 Gail Z. Martin joins SciFiChick.com today to talk about one of her latest releases!

Finding Purpose at the End of the World
By Gail Z. Martin

What would it be like if civilization collapsed and someone kept doing their job?

That was the plot nugget in my mind when we planned out the series. What if two US Marshals survived the collapse? Their colleagues are gone, there’s no government, no central authority, three years into the apocalypse most of the military and top law enforcement are dead. But these two guys stay on the job, doing what they can to stop bad guys and keep the peace.

Over the course of the first four novellas—which are collected in Volume One—Shane Collins and Lucas Maddox battle rogue survivalists, supernatural creatures freed by the cataclysm, government-sponsored genetically altered werewolves, vengeful ghosts, highway bandits, and the certainty that things will never again be as they once were.

I’ve grown very fond of Shane and Lucas, so I’m thrilled that we have a new contract from Falstaff Books for two Wasteland Marshals books (as opposed to four novellas). I can’t wait to see what trouble they get into in Season Two!

The world ended. Then things got tough.

Shane Collins and Lucas Maddox are the last two US Marshals after a global cataclysm that destroyed most of modern civilization. They’re still on the job, fighting the good fight, although they’re no longer fully human and maybe not entirely sane.

Witches and werewolves were not covered in their training as US Marshals. Then again, neither was the Apocalypse.

It’s hard enough trying to navigate a new world of monsters, magic, and no decent takeout. Then there’s the strange magic corrupting the land that affects them more now that Shane is tied to the collections of magical energy throughout the countryside, and Lucas has an ancient elemental spirit riding shotgun in his head.

Yeah, they never mentioned this stuff in training.

Together with Larry N. Martin, she is the co-author of Iron & Blood, Storm & Fury (both Steampunk/alternate history), the Spells Salt and Steel comedic horror series, the Joe Mack Shadow Council series, and the Wasteland Marshals near-future post-apocalyptic series. As Morgan Brice, she writes urban fantasy MM paranormal romance, with the Witchbane, Badlands, Treasure Trail, Kings of the Mountain and Fox Hollow series. Gail is also a con-runner for ConTinual, the online, ongoing multi-genre convention that never ends.

And get a free complete short story, Catspaw, here: https://claims.prolificworks.com/free/UAjd6