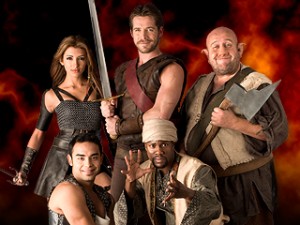 I received a screener for Comedy Central’s new Krod Mandoon and the Flaming Sword of Fire, premiering April 9th.
In the pilot, we are introduced to Krod Mandoon and his band of freedom fighters. Aneka is Krod’s Pagan girlfriend who’s more at risk for an STD than the 56 years of James Bond. Loquasto is Krod’s dim-witted servant that does nothing more than provide slapstick, cringe-worthy comedy. And Zezelryck is a warlock friend of Krod’s who doesn’t seem to be able to perform any actual magic. The small group break into a prison to release Krod’s mentor, who tells Krod that he is the “Golden Child” and supposed to save the world. Meanwhile, the antagonist is the evil Chancellor Dongalor, who (surprise!) has a British accent.

Sound familiar? Yes, the main plot sounds like any epic fantasy series. But add a large portion of humor, and you’ll find a show somewhat reminiscent of the film Robin Hood Men In Tights. In spite of more than the average share of crude humor, it’s a fun change of pace from fantasy series that take themselves too seriously.

Krod Mandoon and the Flaming Sword of Fire airs on Comedy Central on April 9th.

3 thoughts on “First Look: Krod Mandoon and the Flaming Sword of Fire”